The Diamond Awards honor outstanding alumni and friends who have made significant contributions to the field of engineering. The 2011 award ceremony took place on May 13.

Photos from the 2011 Diamond Awards 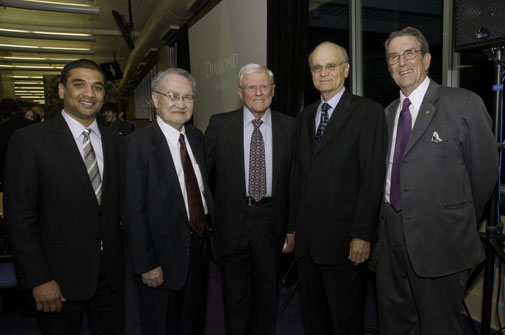 Spaceflight and landing humans on the Moon are considered two of humanity's greatest accomplishments. When George Jeffs graduated from the University of Washington only a few visionaries even considered spaceflight to be a possibility. Jeffs became one of those visionaries and has been a leader in the nation's space program since its inception. A renowned engineer for the Apollo missions to the moon, Skylab, and Apollo-Soyuz, he led the Industry segment of the team that raced the clock to save the Apollo 13 spacecraft that suffered a crippling in-flight explosion. He was later responsible for the design, development, manufacturing and test of the first operational constellation of GPS satellites (block 1) and the Space Shuttle Orbiter and Main Engines, the backbone of the U.S. manned space program for the past 30 years.

Jeffs retired in 1991 from Rockwell International Corporation where he was concurrently: President of the company's Space and Energy (Hanford, Washington and Rocky Flats, Colorado Nuclear Complexes), co-founder and Director of the Strategic Defense Center and a Vice-President of the Corporation. He then consulted for Rockwell, NASA, Boeing and the Los Alamos National Laboratory.

Described by colleagues as an "inspiring, innovative leader who helped define the industry," he is also known for bringing out the best in both large engineering organizations and each of its members. He has received many honors including the University of Washington Alumnus Summa Laude Dignatus, the Presidential Medal of Freedom, two NASA Distinguished Service Medals, the AIAA Goddard Astronautics Award, the California Industrialist of the Year recognition and he is a member of the National Academy of Engineering.

Akira Ishimaru is one of the world's top experts in wave propagation and scattering in random and turbulent media. His research has affected every aspect of modern life, from health care to communications to the defense of our country. Advancements in any area involving wave propagation and scattering, whether it is ultrasound imaging, microwave remote sensing, satellite and cellular communications, optical communications, laser surgery, radar tracking, or astronomy have been facilitated by his pioneering work.

Ishimaru received a bachelor's degree from the University of Tokyo in Japan and worked at Electrotechnical Laboratory and Bell Laboratories before arriving at the University of Washington (UW) to pursue his PhD. His distinguished academic career began in 1958 when he completed the first PhD in the UW Electrical Engineering department. He was immediately hired as a professor of electrical engineering and adjunct professor of applied mathematics and is currently professor emeritus.

He is the author of a classic two-volume treatise on random media, more than 190 journal papers and over 250 conference papers. Among his many distinguished awards, Ishimaru is a member of the National Academy of Engineering. He is an IEEE Fellow with a number of prestigious IEEE awards including the Centennial Medal, the Third Millennium Medal, and the Heinrich Hertz Medal. Perhaps his greatest legacy is the lives he's influenced and the careers he's shaped as an educator. Ishimaru has advised over 40 PhD students, and more than ten years after retiring, he has active research grants and continues to graduate one or two PhD students per year.

The United Nations identifies the water and sanitation crisis as one of the greatest human development challenges of our time. Recognizing the gravity of this problem early in his career, Andrew Benedek dedicated his life to improving water quality. His innovative work in developing membrane technology revolutionized the water treatment industry, spurred innovation in the field, and brought clean water to communities across the world.

Early in the 1980s, while others focused on activated carbon, Benedek recognized the potential of membrane technology to improve wastewater treatment. Determined to make a difference, he took a risk and formed his own company (ZENON Environmental Inc.) to pursue his idea. The resulting ZeeWeed membrane developed at ZENON uses plastic fibers in the shape of thin tubes containing billions of microspores, which screen out all bacteria and most viruses when suction is applied. Energy efficient, cost effective, and easy to use, ZENON technologies are used in 440 wastewater and drinking-water treatment plants across the world today, notably as part of Singapore's successful NewWater Initiative and at the 2008 Beijing Olympics.

Benedek received his BS in Chemical Engineering from McGill University before attending the University of Washington for his PhD. He is a highly respected international authority in the field of water treatment technology, recognized by his colleagues as a visionary engineer, global leader and philanthropist. He has received numerous awards for his work with low-pressure membranes, including the Lee Kuan Yew Water Prize and the Swedish Industrial Water Prize. Since founding ZENON Benedek has been busy developing new companies and technologies in the field of alternative energy.

Can the United States continue to lead the world in innovation? If Thomas Stoebe has a say, the answer is a resounding "yes!" Engineering is a key component of the innovation engine and participation by young people, particularly girls and under-represented minorities, helps drive the field. Stoebe has been a tireless education advocate working to attract more students to the engineering profession, the University of Washington (UW), and to materials science.

Stoebe built a distinguished academic career at the University of Washington as a materials science and engineering professor and played a key role in the development of the department. For many students though, it is not his work on lattice defect properties of semi-conducting and insulating materials, but his educational programs they will remember. In the early 1980s, he founded Washington Mathematics, Engineering, Science Achievement program (MESA), a state-wide program for K-12 minority and disadvantaged students. This program is thriving today with over 90% of MESA students graduating from high school and 60% going to college.

Stoebe also developed an educational program for secondary teachers highlighting hands-on science for direct use in their classes. Based on materials science, this program is now national with 30 one-week programs being held at 30 locations across the U.S.

Other educational outreach programs initiated by Stoebe include the founding of the UW's Minority Science and Engineering program and the development of materials technology curricula for community colleges. Stoebe is an active member of several professional organizations and a Fellow of ASM International promoting materials science and engineering to national and international audiences.

Imagine a one-liter bottle having a second life as seven coffee cups. Then imagine each of these coffee cups could be recycled many times while remaining durable and strong – you're picturing a product made using Ad-air technology at MicroGREEN Polymer, Inc., a Washington company founded in 2002.

Krishna Nadella, MicroGREEN's co-founder and innovative Chief Technology Officer, worked to commercialize patented microcellular plastics technology owned by the University of Washington (UW) while a master's student working with Professor Vipin Kumar. As he pursued his PhD, he took a leadership role in the company, moving it from a startup to a local business with 25 employees. Nadella grew MicroGREEN's partnerships, patented the Ad-air technology, and secured investment funding.

Through MicroGREEN, Nadella is leading a revolution in improving the recovery and recycling of plastics. He recognized early the need to take care of the environment while understanding that citizens will not give up consumerism. Nadella is not afraid to fail and has demonstrated an ability to listen to the market, understanding if his product is meeting a demand or creating value to our society. Since graduation he has continued to research additional applications for electronics, building materials, and transportation and has guided the company to national prominence, recognized by Business Week, Seattle Magazine, and the Wall Street Journal as a leader among young companies with an environmental focus. MicroGREEN has recently been recognized as a runner-up in the Wall Street Journal Technology Innovation Award, as one of Washington’s top 100 places to work, and received the 2010 Washington Manufacturing Innovation of the Year Award.