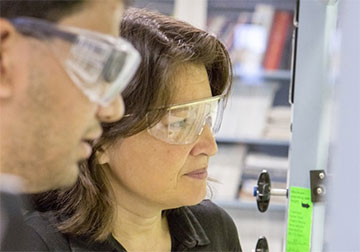 UW engineering alumna Tami Bond is recognized as a leading researcher on the effects of black carbon emission and atmospheric pollution on global climate and human health. In 2014, Bond was named a MacArthur Fellow for her work, which "has provided the most comprehensive synthesis of the impact of black carbon on climate to date, indicating that global black carbon emissions are one of the most important contributions to anthropogenic (or man-made) climate change."

Bond returned to the UW, combining civil and environmental engineering, mechanical engineering, and atmospheric sciences in an interdisciplinary Ph.D. (2000). This hybrid approach allows her to identify not just the effects of black carbon, but what can be done to stop it from being emitted.

Now a civil and environmental engineering professor at the University of Illinois at Urbana-Champaign, Bond’s research combines fieldwork with laboratory studies to take inventories on how much black carbon, known commonly as soot, is deposited in the atmosphere, allowing her to gauge the effects of carbon-containing particles and combustion emissions. Bond has worked to measure household energy in different countries that do not have access to electricity, and she hopes to use a portion of the MacArthur grant money to further similar research.

The global political and environmental influence of Bond's work is emphasized in the MacArthur Foundation citation: "With implications ranging from local action to international policy assessments of climate impact, Bond’s work has the potential to unlock the role of energy in our climate system and to help millions breathe cleaner air."

Adapted from UC Berkeley's Daily Californian, by Adrienne Shih and Robert Tooke, with excerpts from the MacArthur Foundation website and thinkprogress.org's Meet The Woman Who Just Won A ‘Genius’ Award For Setting Things On Fire.

Stay connected with the UW and fellow alumni; enjoy programs and benefits.