Grocery Delivery Service is Greener than Driving to the Store

At the end of a long day, it can be more convenient to order your groceries online while sitting on the couch instead of making a late-night run to the store. New research shows it's also much more environmentally friendly to opt for groceries delivered to your doorstep.

“A lot of times people think they have to inconvenience themselves to be greener, and that actually isn't the case here,” said Anne Goodchild, UW associate professor of civil and environmental engineering. “From an environmental perspective, grocery delivery services overwhelmingly can provide emissions reductions.”

They also discovered significant savings for companies — 80 to 90 percent less carbon dioxide emitted — if they delivered based on routes that clustered customers together, instead of catering to individual household requests for specific delivery times.

“What’s good for the bottom line of the delivery service provider is generally going to be good for the environment, because fuel is such a big contributor to operating costs and greenhouse gas emissions,” Wygonik said.

Emissions reductions were seen across both the densest parts and more suburban areas of Seattle. This suggests that grocery delivery in rural areas could also lower carbon dioxide production quite dramatically.

“We tend to think of grocery delivery services as benefiting urban areas, but they have really significant potential to offset the environmental impacts of personal shopping in rural areas as well,” Wygonik said.

Work commuters are offered a number of incentives to reduce traffic on the roads through discounted transit fares, vanpools and carpooling options. “Given the emissions reductions possible through grocery delivery services, the research raises the question of whether government or industry leaders should consider incentives for consumers to order their groceries online and save on trips to the store,” Goodchild said. 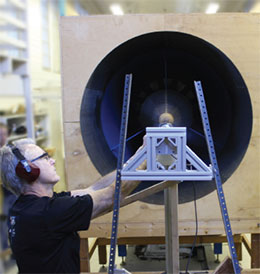 Why couldn't companies capture energy from the air being pumped out of the massive HVAC systems in their data centers or biotech labs and use it to reduce their costs?

When he couldn't find anyone making a commercial wind turbine to harness exhaust, Davis bought a residential system to see if it would work.

“We learned a lot, most notably that an off-the-shelf unit wasn't going to work,” said Michael Kudriavtseff, Davis' partner and a UW alum (BA '04 Business Administration). “We needed something more attuned to specific velocities and different-sized turbines because the (residential) systems were incredibly inefficient.”

It was obvious, Kudriavtseff said, that to get their startup Second Wind off the ground, they needed someone to design an efficient turbine for their system. They approached several engineering companies without success, but found a perfect partner when a friend in the aerospace industry suggested they contact the University of Washington.

So began an uncommon partnership about 18 months ago when Kudriavtseff and Second Wind approached the UW.

Initially, Second Wind sponsored research by Alberto Aliseda, an associate professor in the Department of Mechanical Engineering, which resulted in new intellectual property for the turbine that Second Wind is licensing from the UW.

“Typically, professors and students create commercially viable technology and companies are formed and spun out,” said Deborah Alterman, technology manager for the Center for Commercialization.

“In this case, a startup had a great idea and expertise but couldn't find a commercial partner, and we are moving forward together,” she said. “This wasn't an idea sparked inside the UW, but Aliseda developed a core piece of their system based upon his expertise in turbines.”

Air handling units account for about 40 percent of the operating costs of biotech and data centers, buildings that require 10 times more electricity per square foot than typical commercial buildings, according to Second Wind.

“Typically, kinetic energy in the building air exhaust is wasted,” Aliseda said, “so by placing small turbines (on exhaust fans), we can harness energy without changing the ventilation system or reducing its flow or its ability to expel hot or humid air or exhaust fumes.”

“The key is that we have a constant source of wind and don't have to depend on changes in wind speed or direction from natural wind,” he said. “The challenge is that most HVAC fan systems are small sections, and we have to recover the energy in a cost effective and efficient way. The difficult tradeoff has been the capital investment and the amount of electricity you produce.”

“The energy output varies with the size of the turbine,” Aliseda said, and so far, Second Wind has designed units that generate between 1.5 kilowatts to a larger system that generates 4.6 kilowatts. “That roughly equates to energy savings of 5 percent to 25 percent. In areas where electricity rates are high, those savings can be significant,” he said. 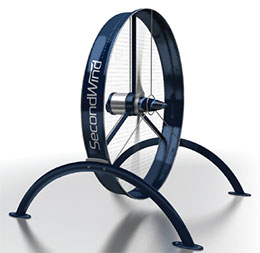 Second Wind will test several units in September on the university campus, and the company plans to be in full commercial production several months after testing is completed, said Kudriavtseff, Second Wind's chief executive officer. The Redmond-based company, which employs six people, is in discussions with several customers and has lined up manufacturers in the Seattle area to make the units, he said.

The potential market for the turbine and system was hard to quantify, Kudriavtseff said. A commercial building typically has multiple exhaust hoods, and the unit can be used on both existing and new buildings. At the university, for example, there are some 2,500 exhaust hoods.

“I'm excited not only because we're helping a local company start up, but we're supporting conservation efforts and this is a product the university could use,” Alterman said. “We're open to helping other startups and finding new ways to work together.”

Nominate an Exceptional Engineer for a Diamond Award 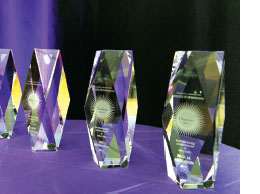 The Diamond Awards honor outstanding alumni and friends who have made significant contributions to the field of engineering. If you know an engineer who deserves recognition, we want to hear from you! Take time to nominate an engineer to join the distinguished ranks of Diamond Award honorees.

Deadline for nominations is Friday, October 18.