A GLOBAL HUB FOR NEURAL ENGINEERING

Smart chips and sensors promise to give amputees, people with spinal cord injuries, and those with neuromuscular disorders far better control of prosthetic limbs and assistive devices, and to revolutionize therapy for many debilitating conditions. In other applications, robots with advanced sensing functions will be useful for environmental monitoring where access is difficult or dangerous. These goals are driving research at the new multi-university Engineering Research Center for Sensorimotor Neural Engineering (CSNE) led by the UW and funded with an $18.5 million, five-year grant from the National Science Foundation, with potential for a five-year renewal. 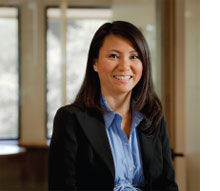 “People were excited by the human-machine ideas in Star Wars. We decided: ‘Let’s go for it.’”

“The center will take recent progress in prosthetic design and chips that interface with the neural system to the next level by integrating engineering and neuroscience with the analytic power of computational analysis,” said Yoky Matsuoka, associate professor of computer science and engineering. She directs the new center with Tom Daniel, UW professor of biology. “People were excited by the human–machine ideas in Star Wars. We decided: ‘Let’s go for it.’”

Under UW leadership, the center unites more than 60 faculty researchers across five core academic institutions including the Massachusetts Institute of Technology and San Diego State University, with the University of British Columbia and University of Tokyo as international partners. Lead industrial partners are Intel, Microsoft, and Lockheed Martin, which contribute resources and participate in center governance. Some 30 other affiliated partners include biotech and venture capital companies, research institutions, hospitals, and secondary schools.

The center’s research mission is to better understand how biological systems acquire and process information and then design devices that interact seamlessly with human beings. The grant builds on UW core strengths in computational neuroscience including brain modeling, and computing functions such as data management, data mining algorithms, and security.

“Neural engineering is exceptionally interdisciplinary, and to accomplish our goals we needed to reach out and collaborate nationally and internationally, particularly to tap deep expertise in microelectronic and robotic technology,” Matsuoka said.

MIT contributes strengths in electronics, microfabrication, robotics, and wearable prosthetics. San Diego State has outstanding programs in biocompatible materials and the rehabilitation sciences. The University of Tokyo is renowned for building sophisticated robotic systems, while University of British Columbia offers expertise in computer/wireless security and in ethics and human values, both critical to responsible, widespread adoption of neural engineering devices.

On the corporate side, Microsoft and UW researchers have been collaborating on rehabilitation and assistive devices with computer interfaces. At a small research lab in Bothell, Lockheed Martin is developing an optic-neural interface system. Intel’s Arizona-based R&D unit wants to expand its signal processing expertise into the sensory neural area. Other biotech companies, startups, and venture capital firms are potential partners in device manufacturing or funding.

Power and Promise of Ultra-Small Sensors 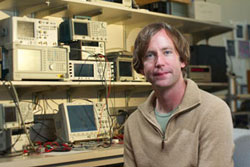 One promising device with early potential impact is a tiny, low-power, wireless sensor that monitors muscle and brain signals. Brian Otis, associate professor of electrical engineering, is collaborating with UW faculty in rehabilitation medicine to develop a NeuroGame Therapy system for clinical and home-based rehabilitation for conditions such as stroke, traumatic brain injury (TBI), and cerebral palsy (CP).

A sensor placed on the skin transmits electrical activity from impaired muscles, allowing a system user to improve coordination as he or she control the movements of computer games. The user benefits from instant feedback of neural activity, and fun exercises that encourage adherence to a therapy plan. This neural activity is also streamed to a database, eventually permitting a therapist to monitor the session and adjust the system remotely. The approach is equally popular with children and adults, including older adults recovering from stroke.

“We have seen substantial improvements in movement for children with CP and several adults recovering from stroke and TBI,” said Chet Moritz, assistant professor of rehabilitation medicine, and physiology and biophysics. “A recent test of wireless electrodes practical for clinical use gives us confidence that we may be able to deploy this system to rehabilitation programs within a few years.”

“We have seen substantial improvements in movement for children with CP and several adults recovering from stroke and TBI [traumatic brain injury].”

“The concepts behind neural engineering are simple, but the science and technology are really difficult and what we are doing would have been impossible a decade ago because we didn’t have the tools,” Otis said. He points to the infrastructure and effort required to develop smart phones. “The economic push needed to develop smart phone technology was huge. The power of our NSF center is the broad, concerted effort that will advance the state of the art in neural engineering. A single research lab or grant can’t do it alone, and our industry partners are critical to developing the market.”

Longer-term developments include wireless sensors and chips to control a lifelike robotic hand, and perhaps even biocompatible sensors for implant directly in the brain or a paralyzed extremity. Matsuoka and computer science and engineering faculty members Emo Todorov, director of CSE’s Movement Control Laboratory, and Rajesh Rao, director of CSE’s Neural Systems Laboratory, are collaborating in this work with UW neurosurgeon Jeffrey Ojemann.

Enabling someone to use thoughts to control a prosthetic device or wheelchair is another intriguing possibility. The mere thought of moving a missing hand or paralyzed arm generates a strong signal that neuroscientists and engineers are trying to harness. Studies have shown that noninvasive electrodes recording from the scalp allow a person to direct thought to move a computer cursor. 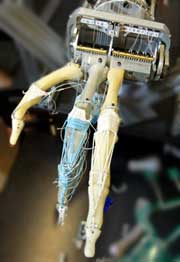 “It’s similar to learning any new motor skill in which you first need to think about the individual steps and then it becomes automatic. Many study subjects move into this automatic mode in just a few minutes,” Ojemann said. “We can do a lot with a reliable signal from the brain even when the neuromuscular system is not being used.”

Ojemann says an electrode recording from the scalp can generate a one-gigabyte file in an hour, and the computational complexity “explodes” when analyzing the neural interactions recorded by multiple electrodes. “For therapeutic applications, milliseconds count,” Ojemann said. “A signal feedback delay of just 70 to 100 milliseconds is too long for a person playing a computer game, because the reactions will be choppy.”

That’s why the work of computer scientists such as Rao and Todorov is essential for decoding neural signals and developing computational models for brain and neuromuscular function and algorithms for controlling external devices and brain-computer interfaces.

Most of the NSF grant funding supports graduate and undergraduate student research at the UW and collaborating institutions, which also include affiliate research partners Morehouse College and Spelman College in Atlanta, and Southwestern College in Chula Vista, Calif. A primary center mission is to integrate research with education and the broader community, including working with school districts in Seattle, Boston, and San Diego.

UW faculty are enthusiastic about offering their students more interdisciplinary research opportunities and reaching out to students from middle school through college undergrads, especially to widen and diversify the pipeline into neural engineering sciences for students from underrepresented populations. Faculty will develop new undergraduate courses, a minor in neural engineering, and a graduate certificate program.

“The NSF funding allows us to build the center infrastructure and expand research and education,” Matsuoka said. “It’s the seed money and just the beginning of a network of collaborations that will grow nationally and internationally and draw the additional resources needed to accomplish our mission.“

With first-class engineering and medical programs, and imagination aplenty, the University of Washington has taken the first big step to become a global hub of neural engineering. An evolving Seattle-based industry could someday provide more of a brain boost than caffeine, and like airplanes, increase human mobility.