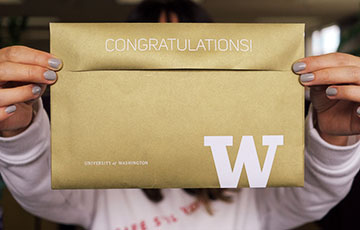 Taking a significant step to improve undergraduate engineering students' educational experiences, the UW College of Engineering will offer Direct to College admission. The change assures incoming freshmen admitted into the college that they will be able to pursue an engineering degree at the UW and allows the college to more fully engage these students in an immersive engineering experience from their first day on campus. Read more »

Investing in the future of innovation

A $50M endowment has established the Paul. G. Allen School of Computer Science & Engineering and will propel the UW to the forefront of computer science education and innovation for generations to come, thanks to $40 million from Allen and a gift of $10 million from Microsoft Corporation in Allen’s honor. Read more »

The student experience: Paying it forward

Mechanical engineering senior David Coven has held research positions in cell biomechanics and materials science labs and internships at Boeing and Tesla. He’s helped organized a regional hackathon and leads UW Hyperloop and Scholarship Junkies. In this Q&A, Coven discusses his choice to study engineering and how he practices compassion and generosity everyday on campus. Read more »

Please join the College of Engineering as we honor six alumni and friends with 2017 Diamond Awards for their outstanding professional and community achievements.

A visionary leader at Microsoft, Brad Smith has steered game-changing initiatives, partnerships and funding for science, technology, engineering and math (STEM) education at the UW and around the region.

Suzanna Darcy-Hennemann has been an influential leader at The Boeing Company and across the aerospace industry as a record-breaking chief pilot, director of flight training and designated captain of multiple jets.

Ashutosh Chilkoti is a world-leading biomolecular engineer at Duke University whose research discoveries have resulted in low-cost point-of-care diagnostics, therapeutics and devices for patients and doctors worldwide.

Allan Osberg’s dedication to his work at the Osberg Construction Company is matched by his passion for community service at the UW, the College of Engineering and for organizations across the Pacific Northwest.

Jean Wang was a founding member and chief of staff for Google Glass, a product that launched a new wave of human/machine interfaces, changed accessible computing and laid the foundation for modern AR/VR hardware.