Imagine traveling from San Francisco to Los Angeles in under 30 minutes at transonic speed. Sound unreal? A team of UW students known as UWashington Hyperloop has been working hard to actualize this process. This winter, they will head to SpaceX headquarters to test their progress.

When Elon Musk publicly released his concept for Hyperloop travel in 2013, it caught the attention not only of engineers and scientists around the globe, but of students on the UW campus as well. Applied physics major Michael Chamerski and engineering students Malachi Williams and David Coven were among them. They followed news and excitement surrounding Musk’s ground transportation theory, which would allow people to travel at hypersonic speed via pods inside vacuum tubes.

They never thought that, in just a few years, they would be designing and building their own Hyperloop pod, nor did they imagine they’d be testing it at SpaceX headquarters in Hawthorne, California. But in June 2015, SpaceX announced a special competition for student teams, inviting them to work through the Hyperloop concept from design to fabrication.

“There was no question – we just had to do it,” says Chamerski. “How could we possibly pass up the opportunity?” He reached out to Coven and Williams, and the three immediately decided to form a UW team.

They began enlisting other students to join what would become UWashington Hyperloop, talking to friends and classmates, professors and graduate students, visiting classes and recruiting students who had pertinent skillsets. They divided their burgeoning team into subteams: aerodynamics and structure, propulsion, manufacturing, systems, and power distribution and storage. And they went to work designing their Hyperloop pod, a first for the UW and one of the first generation of pods in the world.

“My favorite thing about being a part of the team has been, well, being a part of the team,” says mechanical engineering senior Nick Apone. “It’s a unique group of smart, creative UW students who have a shared interest in being the first — the first to come together and attempt to build a pod. Together we take risks, learn from our mistakes, try again, and, hopefully if all goes well, succeed.”

Over the last year, the team has grown to nearly 70 student members, including undergraduate and graduate students. Though most come from engineering departments, some are from other disciplines, such as business, economics and psychology.

“We’re grad students, undergraduates, engineers, business majors, people — like me — from other countries, people who grew up here,” says Harshad Sangwikar, who is pursuing a master’s degree in mechanical engineering. “Some of us have had ‘real-world’ work experience, some of us haven’t, but we bring it all, and our diversity fuels a wonderfully broad range of ideas and possibilities.”

The rapid growth in numbers and across disciplines, Chamerski says, is driven by the project’s needs. Creating a successful Hyperloop pod has yet to be accomplished by anyone; there’s no clear solution, so as the project evolves so does the team. Team members meet in the CoMotion MakerSpace and communicate using tools such as Skype and Slack. They also often move across subteams to share and apply skills where they’re most needed. That fluid team dynamic allows for a broader understanding of the project as a whole and gives students opportunities to work in areas and with students they might not usually work with. 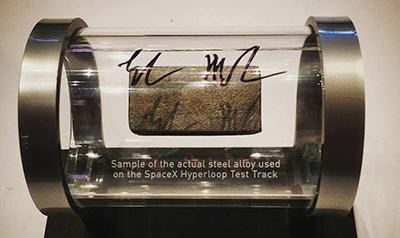 So far, the investment in cross-functional engagement and collaboration has paid off. UWashington Hyperloop was one of more than 100 teams invited to participate in the first part of the competition, which took place at Texas A&M University in January 2016 and focused on design concepts. The UW team won the Safety Subsystem Technical Excellence Award and the chance to advance to the next leg of the competition, where they will test their pod on SpaceX’s one-mile track in January. Competition weekend has been scheduled for January 27-29, 2017, depending on construction and testing of the track.

“I’m looking forward to seeing our pod make it down the track and knowing, in that moment, that all of our hard work and dedication came together and made it possible,” says pre-engineering student Jaclyn Rainey. Rainey serves as the team’s manufacturing lead; so far she’s most enjoyed designing and fabricating her first composite layup. “I had never done anything like that before, and it was so much fun that I can’t wait to create a full composite shell,” she says.

One of 30 teams competing in the second phase, UWashington Hyperloop has been working hard to refine their design and fabricate a prototype pod for on-track testing. The process hasn’t been easy, and there’s still a lot of work to be done between now and the competition. The materials and equipment needed to build a pod can be expensive and difficult to acquire, and so the team has relied heavily on sponsors, donations and the expertise of their faculty advisers, such as mechanical engineering professor Mark Tuttle, who has offered guidance on the design, stress analysis and manufacturing of the composite shell.

But, as Rainey attests, they acknowledge these challenges as opportunities instead of road blocks. “We have faced great hardships in getting the materials we need and then realizing that they don’t work cohesively together,” she says. “These situations have forced us to be really creative and strategic about how we use and implement them.”

For the final competition, pods will be 3/4 scale and, though fully functioning, they won’t carry any human or animal passengers. It’s not expected that any of the student pods in the competition will reach Hyperloop’s theoretical full speed of 760 miles per hour; however, the UW students hope their pod will reach at least 300 mph.

But it’s not just the creation or the competition that drives these students; it’s the camaraderie and inspiration they draw from each other.

“For me, UWashington Hyperloop has reinforced the value of teamwork,” says Sangwikar. “The only way for us to succeed is through collaboration — without all of us, we wouldn’t stand a chance.”

Chamerski agrees. “I don’t think I’ve ever known so many driven, hard-working and passionate people, and I’m grateful that we share the same dedication to this work,” he says. “It’s really cool to think that — together – we are playing a role in the development of a new kind of transportation and may be shaping history in the process.”