The College of Engineering and Burke Museum partner on a 3-D scan-and-print project of mammoth proportions. 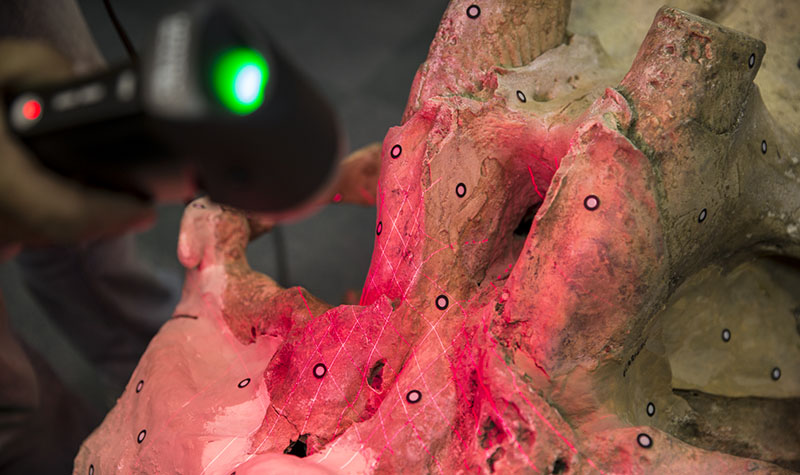 A hand-held scanner is used to scan the mammoth skull.

Over 13,000 years ago, giant Columbian Mammoths roamed North America, from the northern United States to Costa Rica. Standing 13 feet at the shoulders and weighing between 18,000–22,000 pounds, with tusks that could reach 14 feet in length, these were the largest species of mammoths. They existed alongside early humans and were the last of their kind to walk the earth.

The Burke Museum of Natural History and Culture wants to give visitors the opportunity to stand in front of one of these great beasts when it opens its new building on the University of Washington campus in 2019. Museum staff plan to display a Columbian Mammoth skeleton discovered near Richland, Washington in the new exhibition hall. The problem is that they only have about 20% of its bones.

UW engineering students and instructors are now working with museum staff to scan, digitize and 3-D print the missing parts of the mammoth skeleton. Thanks to a new interdisciplinary class, the museum’s plans to share the Richland mammoth are not only moving forward but are also expanding into the digital realm.

“This project is where Jurassic Park meets the Star Trek replicator,” explains Steven Weidner, an affiliate instructor from UW's mechanical engineering department who is leading the class. “By printing this mammoth, we’re pushing the boundaries of what’s possible with large-scale 3-D printing.”

It’s become a mammoth of a collaborative project, so to speak — one that could fundamentally change how the Burke’s collections are documented, stored and shared with public audiences and scientific communities.

‘Together we figure out the best techniques’

Complete skeletons of any animal are rare in paleontology. It's not uncommon for museums to display partial skeletons, with missing pieces typically sculpted by hand using foam and clay. But that process can be time-consuming and inexact, says Burke collections manager Meredith Rivin.

As for the Richland mammoth, the museum has most of its limb bones and portions of the skull and mandibles, but to exhibit it permanently, they need to reproduce a number of missing parts. 3-D printing, Rivin says, will allow for more accurate reconstructions in far less time.

That's why museum staff connected with Weidner in fall 2015. He had initially approached the Burke about a different 3-D printing project idea, but when Burke staff expressed their need for replacement mammoth bones, Weidner enthusiastically accepted the challenge. Working through the College of Engineering’s VIP program and with Burke staff, he created plans for a multi-year 3-D printing project that would allow UW students to learn and apply additive manufacturing technologies to museum collection management and exhibition. 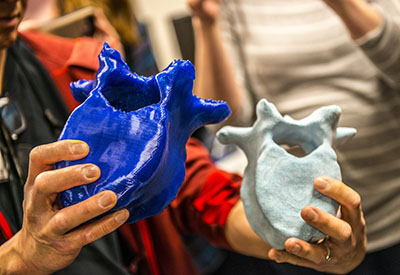 In Weidner’s class, undergraduate and graduate students from various disciplines work together to create 3-D scans and 3-D printed replicas of mammoth bones and other artifacts from the Burke’s collection. The course has met for two quarters so far; to reflect the project’s interdisciplinary nature, each session has been offered by different academic departments — in Winter 2016 through mechanical engineering and Spring 2016 through biology. Access to engineering 3-D printing experts has enhanced the students’ experience. Guest lecturers have included Mark Ganter, co-lead of the Solheim Rapid Prototyping/Rapid Manufacturing Lab and professor of mechanical engineering, who facilitated a class on powder-bed printing.

Students serve as an engineering consulting team for the Burke and meet regularly with their staff. Through hands-on experimentation, they test a variety of 3-D scanners (ranging from handheld infrared scanners to photogrammetry and CT scans), digital record-keeping techniques, modeling software and 3-D printers.

Weidner describes the class as “a learning environment that emulates working in a professional environment” — once the students define the problems, they must research the technologies needed to solve them. This means adopting and experimenting with an array of tools, figuring out how they work, their capabilities and limitations and, when necessary, developing the skillsets required to use them.

It’s an approach that appeals to many engineering students, including a pre-engineering junior, Kurt Weiss.

“An opportunity to work with fossils and cutting-edge scanning and modeling technologies? I signed up for the class immediately,” says Weiss, who recently transferred from Bellevue College. At the UW, he’s studying aerospace and, after graduating, hopes to work in aerodynamic design and structures engineering. 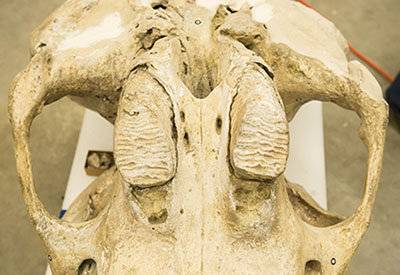 “These areas deal heavily with 3-D renderings and scaled models testing within wind tunnels,” he says. “So the experience I’m getting through this class with the wide variety of scanning equipment, modeling programs and printing technologies is helping me develop the knowledge and skills I’ll need down the road.”

Approximately 20 students have enrolled each quarter, ranging from first-year undergrads to graduate students. About half of them come from engineering departments: mechanical engineering, aeronautics and astronautics and human centered design and engineering. Others are from museology, geology, paleobiology, archeology and photomedia.

First-year pre-engineering student Kaiyu Shi has greatly valued the opportunity to collaborate with students from other disciplines. “Most of my classes are math and physics, so learning how students from other areas across campus approach a project like this has been eye-opening,” he says.

“Together we figure out the best techniques,” he says. “The engineering students often bring more knowledge about the technologies and equipment than the museum folks have, but we have the knowledge about the collections, the bones, their histories and importance. And we’re all working together to come up with the best way to document and share them.” 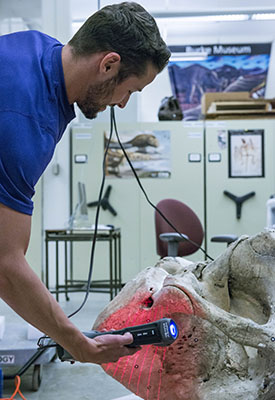 Scanning takes place at the Burke, where the bones are housed and scanned one at a time. Weiss says they plan about three hours of scanning time per small to medium-sized bones; larger specimens, like the skull, can take more than five hours.

3-D scanning not only makes it possible to print replicas of missing bones and incomplete fossils, but the scans themselves also provide new and valuable data on the mammoth’s anatomy. And since they’re digital, the Burke will make them accessible online to researchers worldwide.

“Our goal is to provide a complete digital atlas of the mammoth — and eventually, other fossils — that can be used by researchers and the general public to answer research questions and for education,” explains Rivin.

Once the data is captured, it is modeled for printing. To determine best print strategies, the class has worked closely with WOOF3D, a student-led 3-D printing club in the College of Engineering. Some of the engineering students in the class, like Shi, are also members of WOOF3D where they design and build desktop-size and large-scale 3-D printers. The club is currently prototyping Big Blue, a large-scale 3-D printer with a 1.5 cubic meter build space to accommodate mammoth’s larger bones, such as the skull, femur and jaw bone.

Although many of the larger pieces are on hold for Big Blue, the class has already 3-D printed several smaller bones, such as the mammoth’s vertebrae (back bones) and metatarsals (toe bones). Different printers yield different outputs, and so the class is constantly working to refine the finished products.

“In every scan and printed item, we aim for perfection,” Weidner says. “‘Good enough’ doesn’t cut it in engineering or in scientific research, and so we must ensure our final results are as close to the real thing as possible.”

Rivin and Weidner anticipate that the data digitization and 3-D printing will continue to evolve over the next few years until the Richland mammoth is permanently displayed. Weidner wants to offer the course again next year; he’s certain that every future step of the project will invite new challenges and problems to solve.

Rivin is particularly inspired by the students’ grasp and application of advanced technologies. “They’re fearless and curious,” she observes. “They’re not intimidated by the scope of the project or its hurdles but instead are eager for the challenges. They’ve approached this project like real professionals.”

The Burke is eager to share its new mammoth data with institutions large and small. “We’re fortunate to be a part of the UW community and, as such, have the opportunity to tap into the College of Engineering faculty and students’ first-rate engineering expertise,” Rivin says. “A lot of natural history museums don’t have such a rich resource in their backyard, and we’re thrilled to be able to collaborate in this way.” 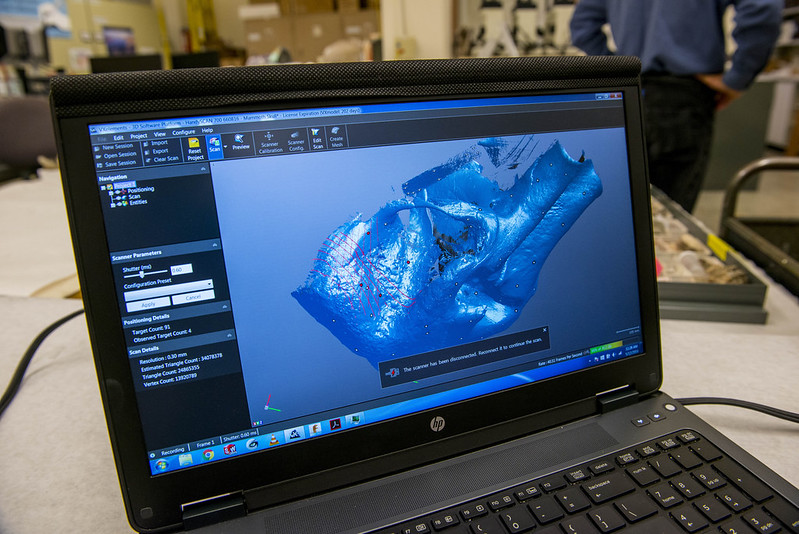