Study abroad programs like Engineering Rome give students an opportunity to develop a global perspective on engineering. 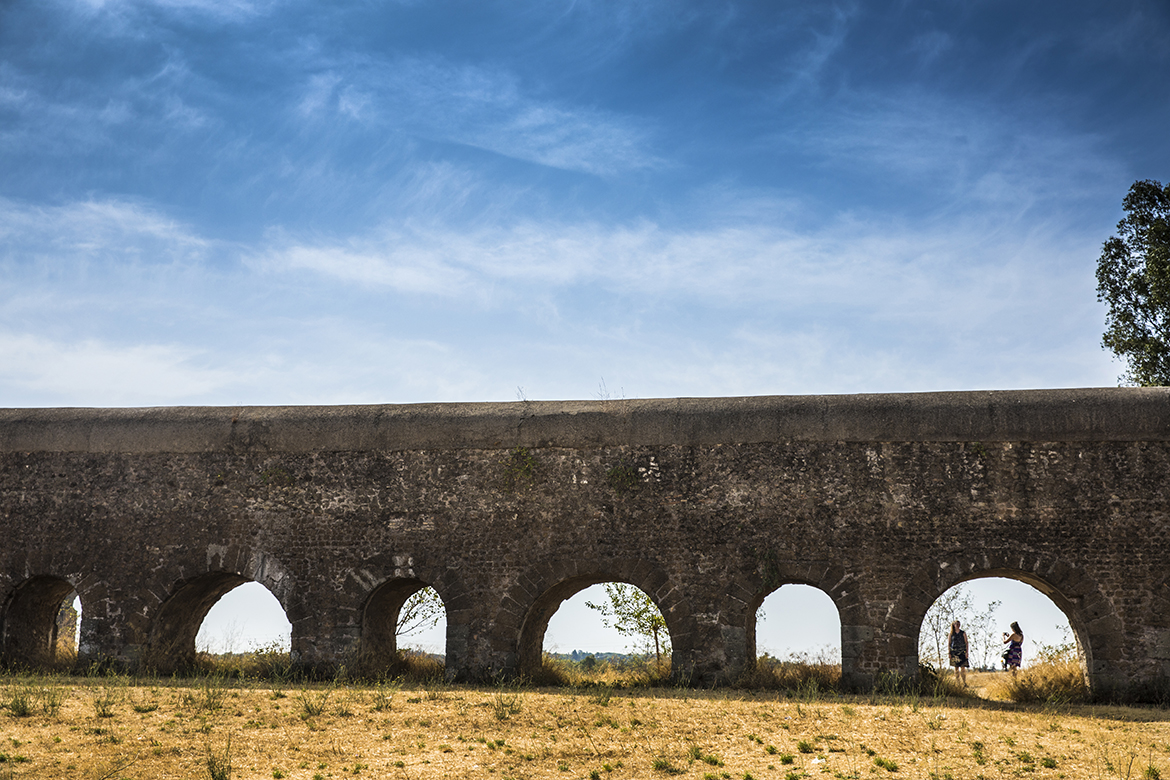 Aqueducts, such as the Aqua Felice, provide students with an opportunity to explore structural arches and water systems.

“But I’m grateful I did,” the second-year pre-engineering student says. “The perspective I’ve gained about what engineering is — and what it can be — has been eye-opening.”

Griffin is one of 20 students who participated this summer in Engineering Rome, a UW study abroad program offered through Civil & Environmental Engineering (CEE) that gives students an international and historical perspective on engineering.

It’s one thing to read about engineering principles and projects in textbooks, but it’s a much more meaningful experience to visit places where you can see such activity in action — or at least the evidence of it. 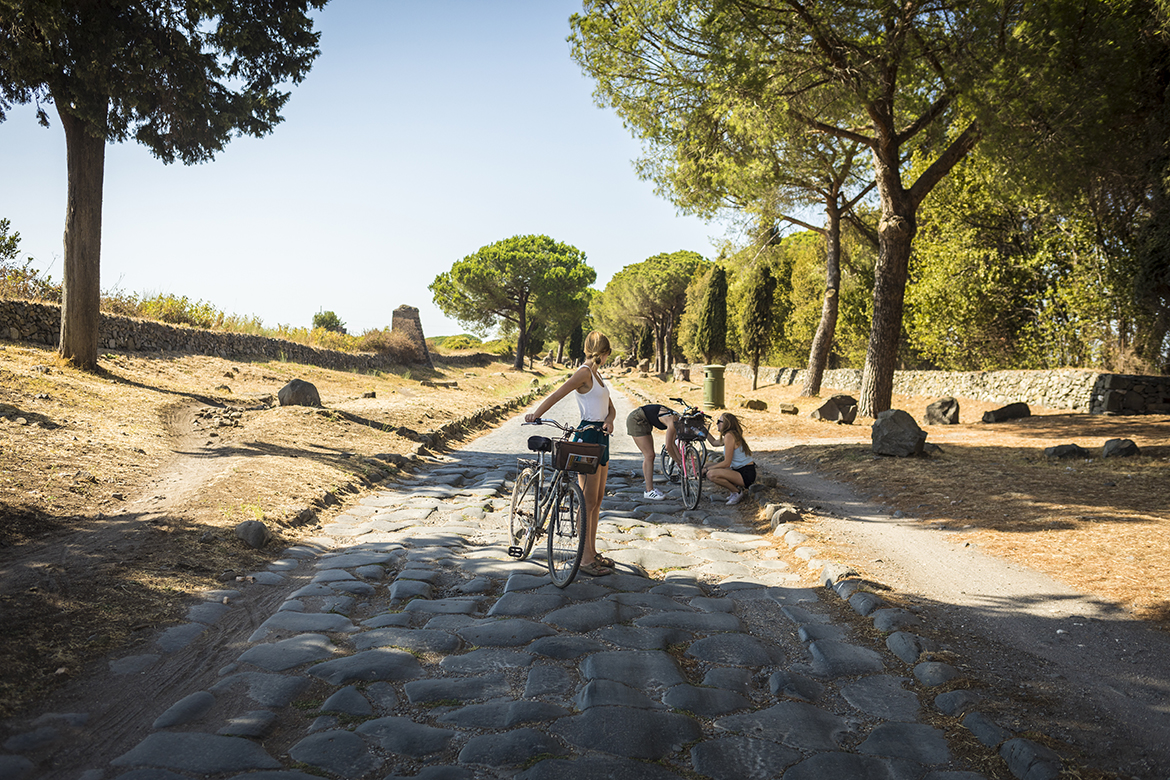 Students ride bicycles along Appian Way (Via Appia Antica), one of the oldest Roman roads. 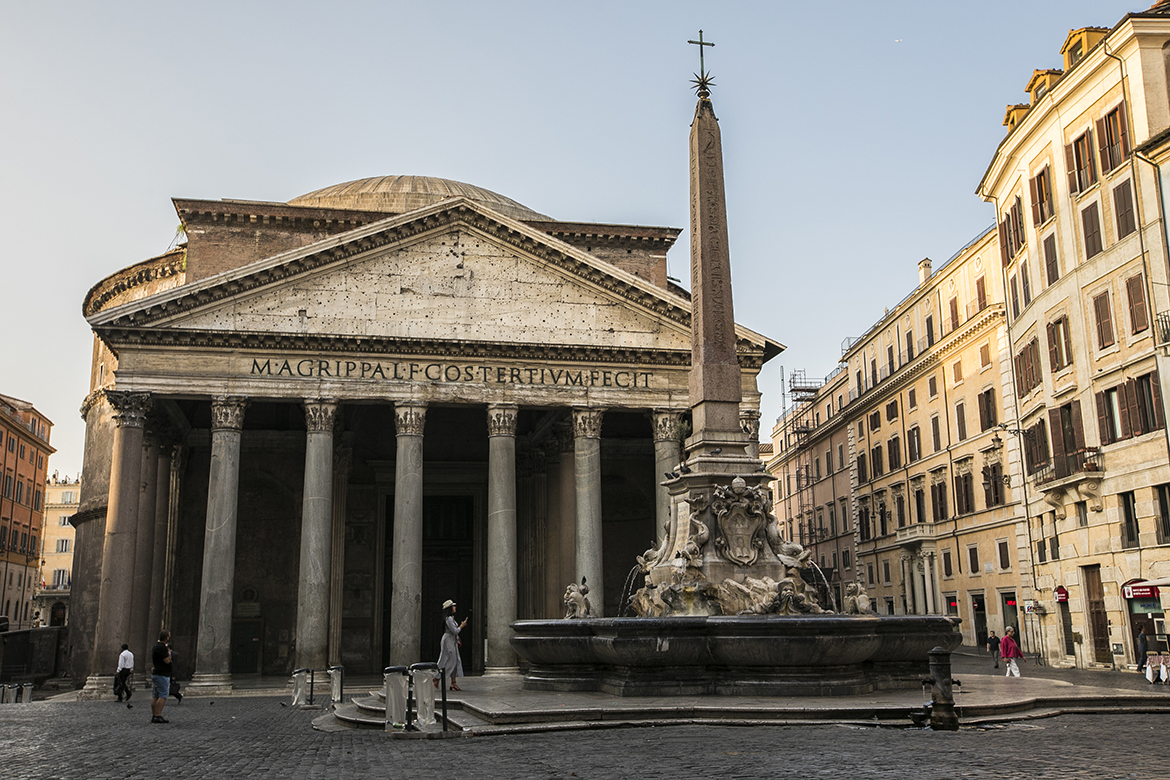 “Rome is one of the richest sites in the world for exploring engineering through the ages, from ancient Roman aqueducts to Baroque basilicas to modern subways to sustainable life in a massive modern city,” says Steve Muench, a CEE associate professor and the director of Engineering Rome. With support from CEE, UW Study Abroad and the UW Rome Center, he launched the program in 2013. It’s now one of several programs in which students can study abroad and earn engineering credits over the summer.

The program is open to students at all levels of study — from first-year to graduate students — and focuses on key topics in civil engineering through project-based experiential learning. Students study engineering theories and concepts in the classroom, travel as a class to sites where they observe and evaluate how such principles have been applied, then complete projects synthesizing their classroom learning and field observations. 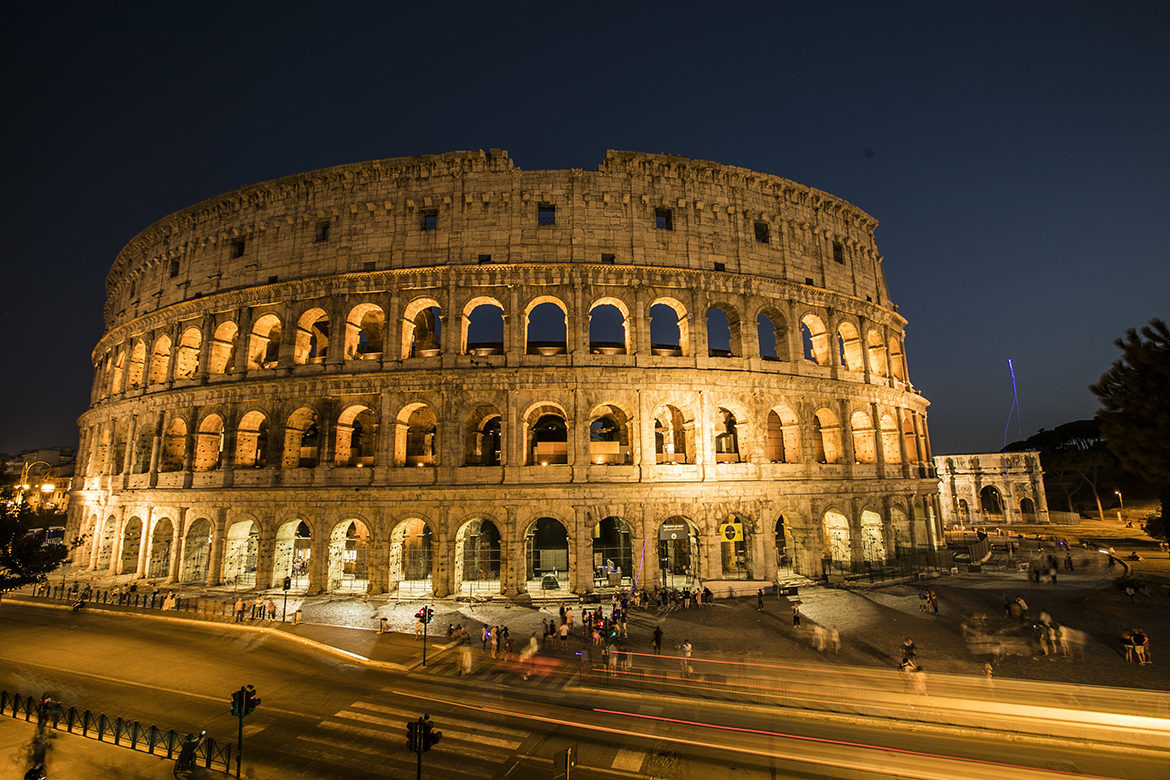 The Colosseum exemplifies how the Romans were able to use the arch for great engineering effect and architectural beauty.

During the course, the students meet with local experts on Roman cities, archeology, construction, infrastructure and sustainability. This integration and exposure are critical parts of the program.

“Engineering as a field is increasingly an international and collaborative occupation, and programs like Engineering Rome can help set students up for successful careers in a global marketplace by exposing them to differences,” Muench explains. “After all, the most pressing environmental, health, and technological issues cross international boundaries — why shouldn’t our students?”

Designed to maximize engineering student participation, Engineering Rome is offered every other year between UW’s summer and autumn quarters. Students take part in a preparatory seminar that meets weekly on campus during spring quarter then travel abroad for four weeks in August and September. 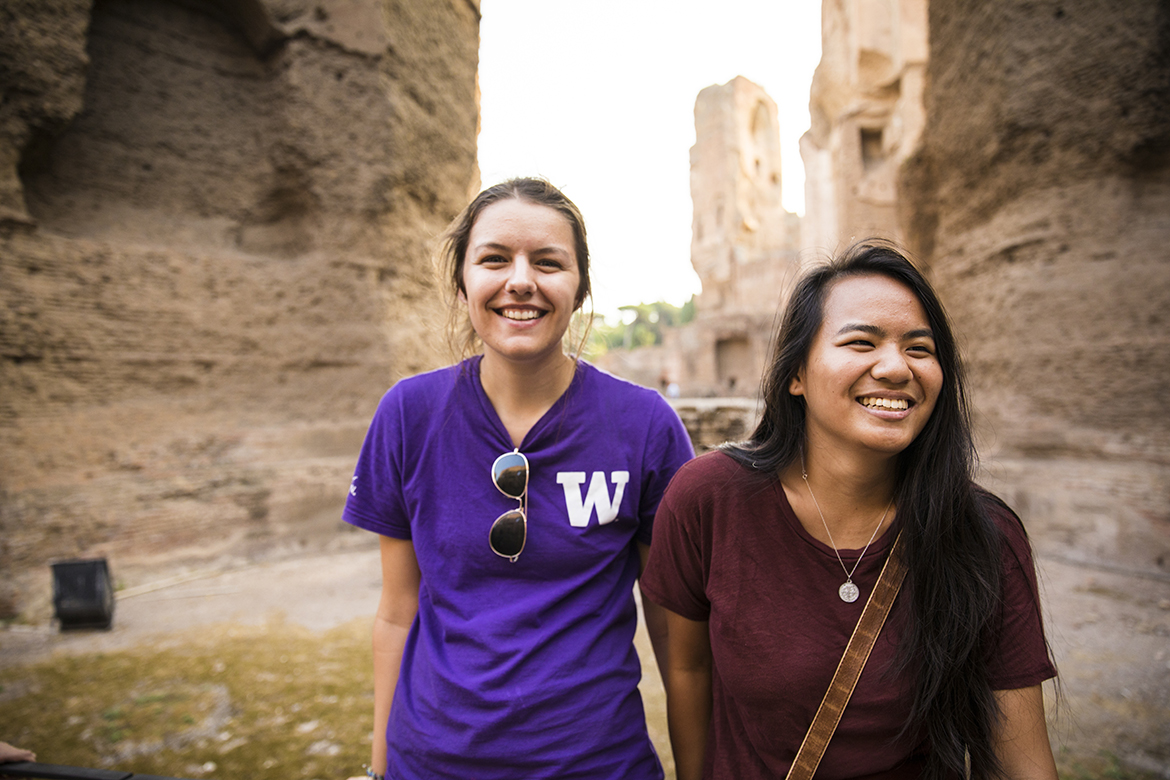 “I am in awe when I think about the skill, persistence and ingenuity of ancient engineers,” says Bailey Griffin (left), with classmate Tess Pietro.

For sophomore Agustin Castro, having an opportunity to get to know other students and become familiar with what to expect before traveling overseas was incredibly helpful. So was receiving a UW Global Opportunities Scholarship.

An industrial and systems engineering major with an interest in transportation planning and infrastructure, Castro was thrilled about the possibility of travelling to Europe to study Rome’s Metro — an underground transportation system that has given engineers and archaeologists the unique challenge of navigating thousands of years of history anytime a new station or line is built. But he was reluctant at first.

“I thought I was going to have work all spring and summer to cover the cost of the program, but the Global Opportunities Scholarship made it possible for me to focus on school instead of worrying about the financial impact of studying abroad,” Castro says.

“I wouldn’t have been able to travel to Rome were it not for the Global Opportunities fund,” she says.

Griffin and Castro believe that engineering students could also benefit from more understanding about why study abroad opportunities are relevant to engineering.

“Going into it, I had no idea how much the experience would impact me,” says Castro. “In addition to deepening my technical, research and communications skills, the program also boosted my appreciation of engineering history. It’s one thing to read about engineering principles and projects in textbooks, but it's a much more meaningful experience to visit places where you can see such activity in action — or at least the evidence of it.”

The perspective I’ve gained about what engineering is — and what it can be — has been eye-opening. 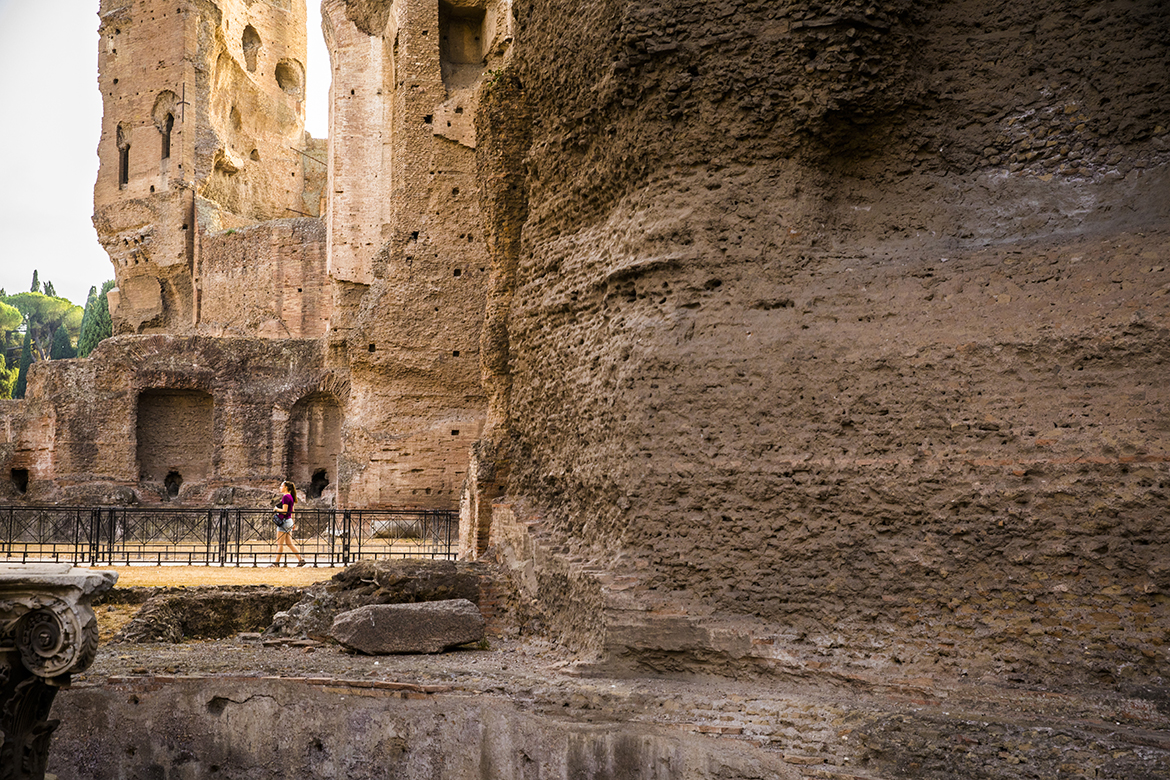 Students spend an afternoon at the Baths of Caracalla viewing arches in an ancient Roman setting after studying them in the classroom earlier in the day.

Engineering Rome’s curriculum focuses on three themes: structures, water and sustainability. To complement in-class lectures and projects, students visit historical sites for real-world examples. At the Colosseum and Arch of Constantine, they observe and document classical Roman arches. Other locations, such as the Aqua Claudia aqueduct in Aqueduct Park (Parco degli Acquedotti), Trevi Fountain and the Baths of Caracalla, provide the class with an opportunity to expand their understanding of water flow and management.

“Being able to visit places like the aqueduct systems instilled in me a deep appreciation of engineering from a historical perspective,” says Griffin. “Considering the time period and the advanced capabilities of the aqueducts, I am in awe when I think about the skill, persistence and ingenuity of ancient engineers.”

“And that so many of these structures have lasted for so long — it’s just so cool,” adds Castro. 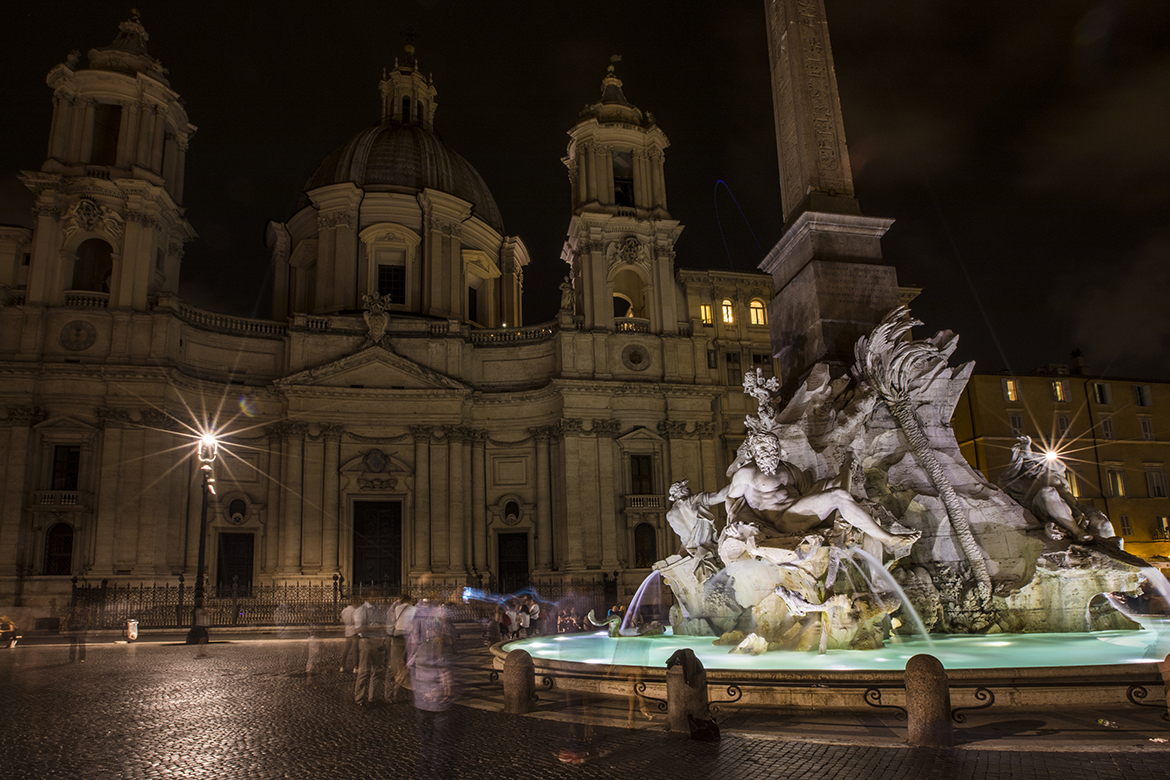 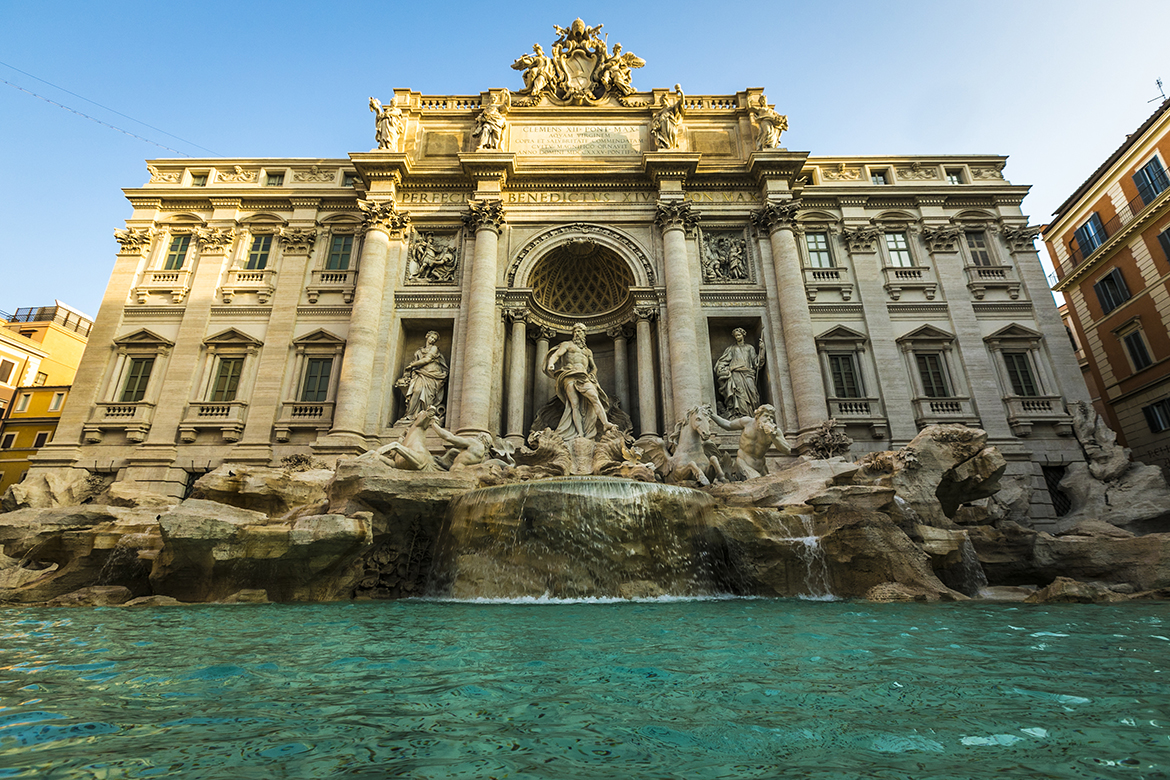 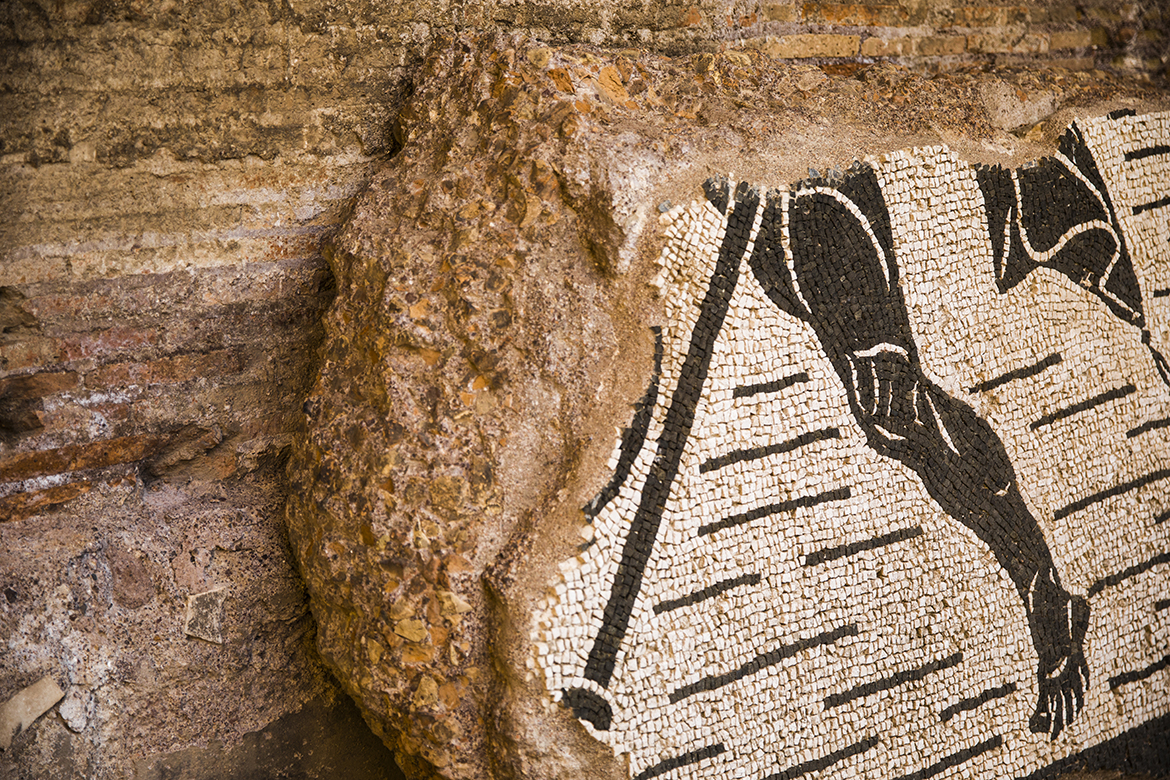 A partial ancient mosaic at the Baths of Caracalla 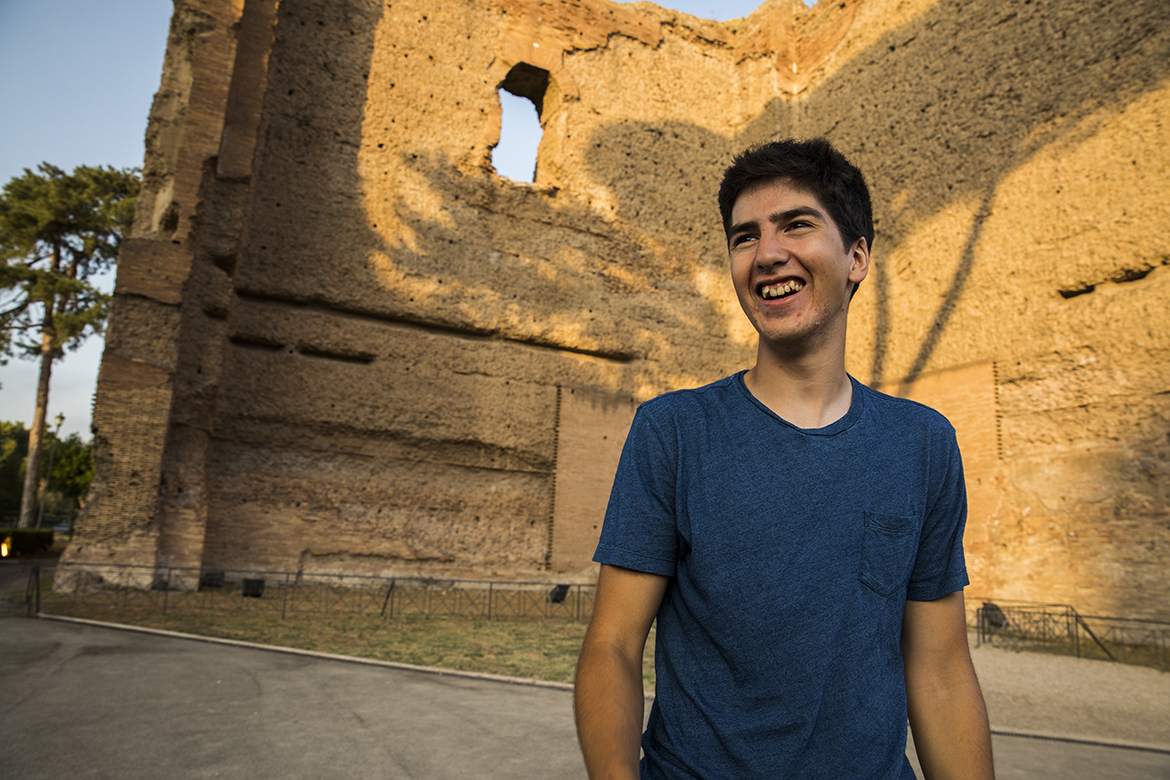 So many of these structures have lasted for so long—it’s just so cool!” says Agustin Castro. 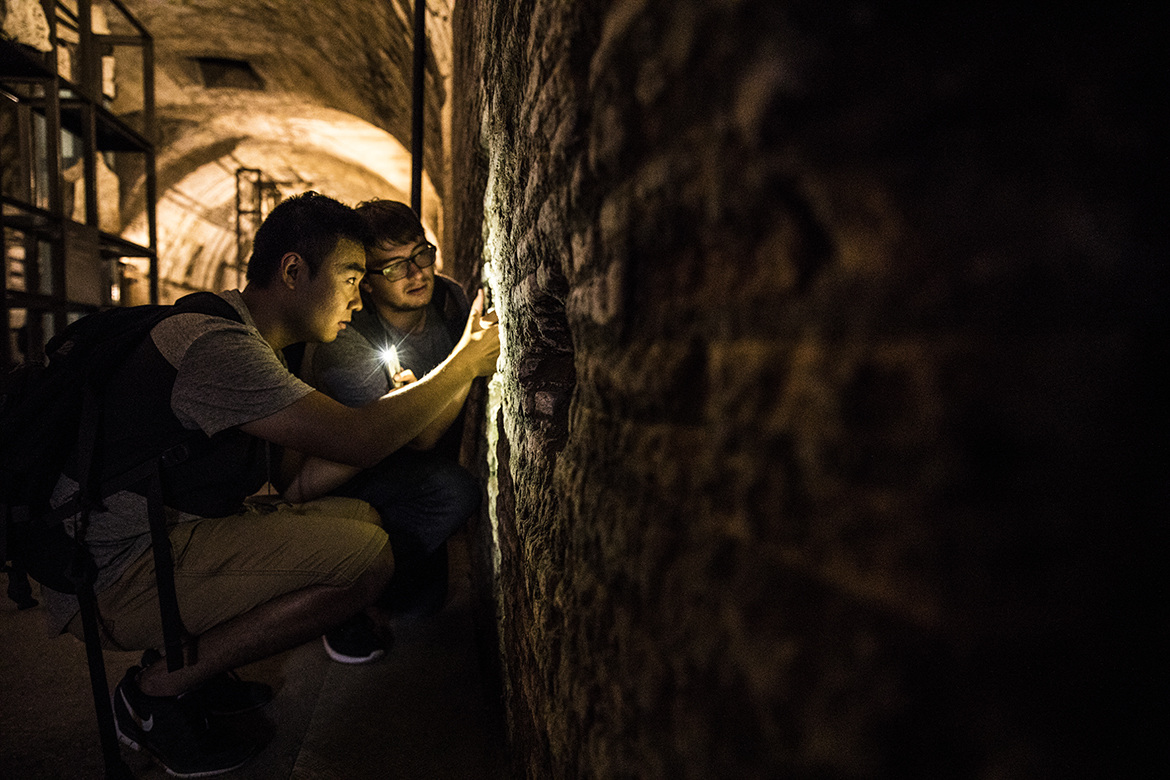 Daniel Bi and Joel Corlew in the Mithraeum of the Baths of Caracalla, an underground space once used for religious gatherings.

With more than 3,000 years of history and engineering feats accessible to visitors, Rome provides a unique setting to consider not just the contributions of engineers to infrastructure and society but also the concept of sustainability.

“Most students’ ideas of ‘sustainable cities’ are influenced by contemporary engineering, but Rome offers a fascinating alternative: It’s dirty, cluttered and old, yet it’s survived for millennia,” says Muench. In this way, he adds, it pushes students to think critically about perspective and difference. 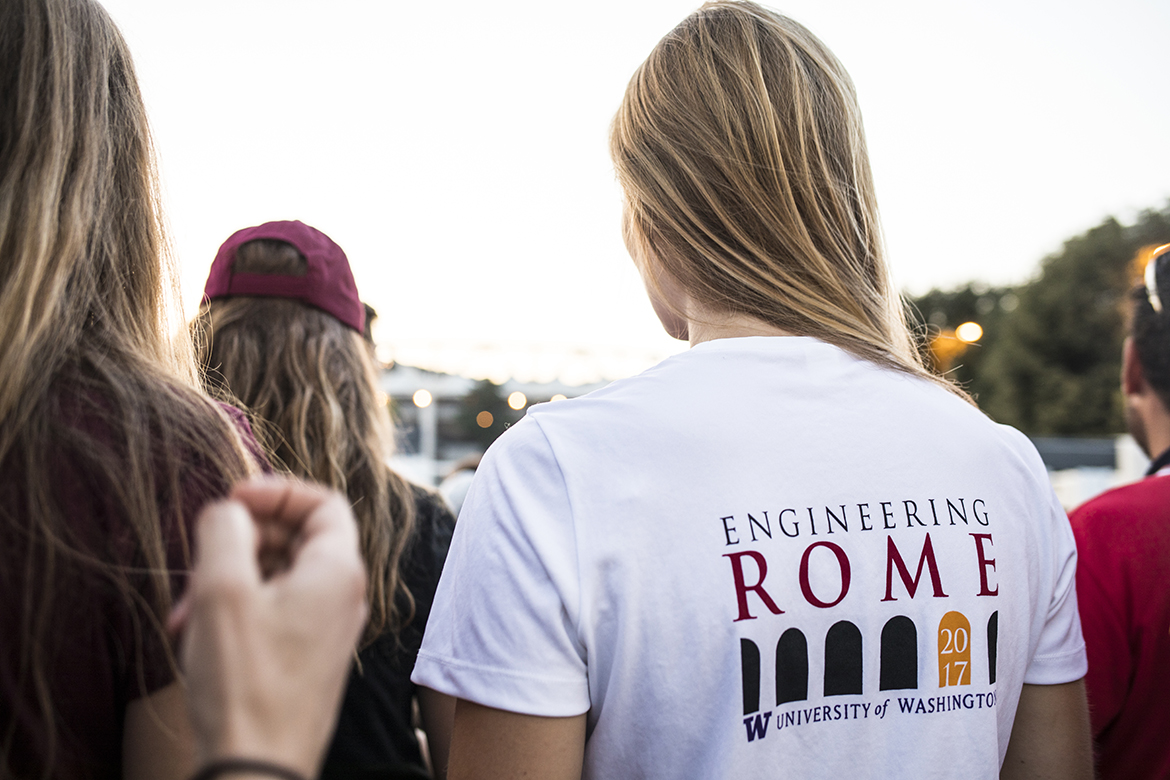 For Griffin, these were some of the most valuable lessons.

“Engineers across the globe and throughout time have solved problems using a variety of approaches, resources and perspectives,” she says. “For example, in the United States, when buildings become old, it’s common to tear them down. But in many European cities, like Rome, they are built around or added onto. It’s not that one way is better or worse than the other — they’re just products of different cultures and perspectives.”

Knowing that such diversity exists in the field has made Griffin even more excited to be an engineer.

“Thanks to my time abroad with Engineering Rome, I’ve gained a greater awareness of and appreciation for diversity, and that’s something I look forward to applying to other teams — in my classes at the UW and professional career after graduation,” she says.

Learn more about how you can help students gain global perspective and prepare for success in today’s world.