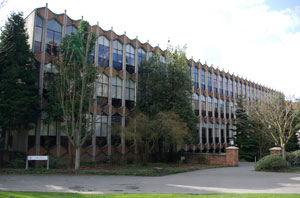 After "temporarily" occupying Miller Hall for 35 years, freshmen engineering students finally received their new home—Sieg Building. The building opened in 1960 and was known as General Engineering Hall—until 1972. It cost $1.2 million or $18.80 per square foot. Because of the building's location, the architects Harmon, Pray and Dietrich were faced with the task of creating a facility that harmonized with the upper campus Gothic Revival style. To do so they designed an expressed structural frame with exposed aggregate panels. Few people were happy with the result. Sieg Building was remodeled in 1973 and again in 1975 to house the Computer Science & Engineering department.