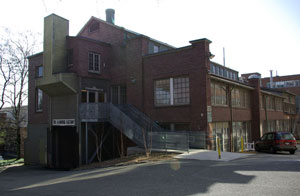 Over the years, the Engineering Annex has housed many different UW organizations. Originally the Engineering Annex was designed by WNG Place for the Alaska-Yukon-Pacific Exhibition. The annex was built in 1909 for $12,000. After the fair, the building became the UW's foundry. Horses were stabled here and used to pull wagons of coal to operate the UW's power plant. Paint and electrical shops were also located here. In 1920, the addition of frame with brick veneer was added to the north and south ends. For a time, the facility housed the Mechanical Engineering Department's machine shops and foundry. In 1961 Richard Boullion's architectural plans were used to remodel the Engineering Annex's upper levels. The Mechanical Engineering Department, the environmental studies and the Industrial & Systems Engineering's Integrated Learning Factory became housed in the annex. This learning center was funded by a National Science Foundation grant and matching funds from the College of Engineering.