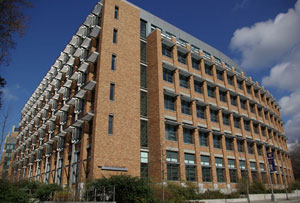 The Paul G. Allen Center for Computer Science & Engineering is a state of the art facility that has enabled the Paul G. Allen School of Computer Science & Engineering (CSE) to offer an unparalleled research and educational experience to students. Groundbreaking for the 85,000 square foot building, which was designed by LMN Architects, took place in autumn 2001 and the building opened in autumn 2003. At the time, the building increased CSE's total space by a factor of 2.5 and its laboratory space by a factor of 3 — approaching national norms for comparable programs and providing a springboard for CSE to grow into one of the preeminent computer science and engineering programs in the nation.

The cost of the facility was $72 million, of which, $42 million was raised privately and $30 million was provided by the UW and the state. The fundraising campaign leadership included Tom Alberg (Madrona Venture Group), Jeremy Jaech (CSE alumnus and co-founder of Aldus and Visio), and Ed Lazowska (Bill & Melinda Gates Chair in Computer Science & Engineering and head of the department from 1993 to 2001). Leadership gifts for the building were made by Microsoft co-founder Paul G. Allen, the Bill & Melinda Gates Foundation, and Microsoft Corporation.