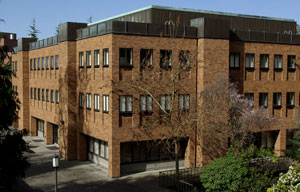 Originally named the Chemical Engineering Building, Benson Hall was built in 1966 for approximately $2.9 million. It was constructed from a design by Bindon, Wright and Partners. The building incorporated precautionary design for its time. It had a 35 ton sliding door and reverse pressure rooms. These features were incorporated to prevent the accidental escape of radioactive material in the pulse neutron generation lab or particles from escaping when the door was opened. Also a special sump was installed to prevent harmful chemicals from entering Seattle's sewer system. The four-story building originally housed nuclear and chemical engineering. The facility was named after Henry K. Benson, who served the UW more than 50 years, including being Chair of Chemistry and Chemical Engineering from 1919 to 1947.