Do you lament weak public interest in science? Worry that relentless advances in computer power are supplanting brain power? Take heart. Legions of people who may not know a peptide from a quark are discovering their inner scientist and are proving that the brain can still beat a computer. 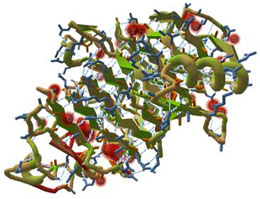 An intriguing computer game conceived on the slopes of Mount Rainier and launched into global cyberspace at the University of Washington is proving that science is cool. Now close to 200,000 registered players around the world are playing Foldit and tackling thorny problems in protein folding that stump even a supercomputer. Foldit is barely a ripple in the tsunami of 11 million people addicted to the "World of Warcraft" game, but Foldit's ardent players are not whiling away the hours simply pursuing an adrenaline rush. They are helping advance knowledge in biochemistry that could lead to new treatments for disease.

Serious scientists are paying attention. Foldit's creators recently published a paper in Nature (Aug. 5), reporting that game players are at least equal to and sometimes better than a computer in folding long chains of amino acids into compact three-dimensional shapes.

Proteins function properly in the body only when they are in the correct shape to allow the amino acid components to participate in biochemical reactions. Folding mistakes seem to be associated with a variety of health problems ranging from allergies to neurodegenerative disorders. Knowing how a specific protein folds into the right shape is important to understanding disease causes and developing new therapeutic drugs. The problem is that a newly formed amino acid chain could theoretically twist and fold into millions of possible shapes. Figuring out how they fold correctly and predicting the proper shape for a specific protein is one of the most difficult challenges in molecular biology, and trillions of calculations are needed to model even a small protein.

During a hike at Mount Rainier in 2006, computer science and engineering professor David Salesin and biochemistry professor David Baker mulled over a problem with Baker’s software program to predict the shapes of folding proteins. Called Rosetta@home, it performs trillions of calculations during downtime on the computers of about 200,000 volunteers. Some wrote to Baker saying they noticed the computer doing silly things while testing every possible pathway to find the best fold. They wanted to help guide the analysis. 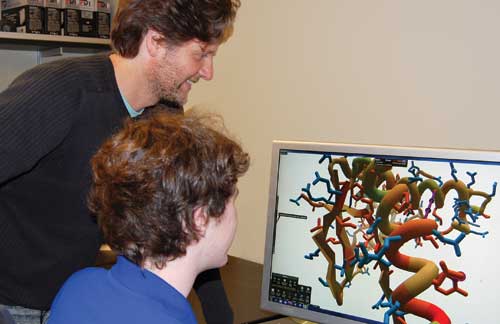 Baker asked Salesin for advice on how to make the network more interactive. By the time they returned to the trailhead, they had settled on a multiplayer online game, and Salesin referred Baker to Zoran Popović, CSE associate professor and a computer graphics and animation expert. Popović enlisted the skills of two of his doctoral students, Seth Cooper and Adrian Treuille (CSE PhD ’08), the latter now an assistant professor at Carnegie Mellon.

To make Foldit fun and accessible for players with no scientific training, the team ditched technical terms and developed a game with colorful graphics, upbeat music, and tools named "wiggle," "shake," and "freeze." Just as in other multiplayer games, rewards, feedback, and community networking are central to maintaining engagement.

Players compete individually or in teams to achieve high scores based on the stability of their folded structures, and they can share strategies in chat rooms and blogs. Associate Professor Zoran Popović leads CSE’s Foldit team.

People of all ages and backgrounds are playing Foldit, launched in 2008. Good visualization skills are an asset, but players learn all they need to know simply by playing, and biochemists tend to perform no better than laypersons. People especially excel over computers when a folding problem requires an intuitive leap or strategy shift.

The game continues to evolve through interchange among players, developers, and scientists. Obtaining valid scientific folding results is a key goal; another is to incorporate the best player strategies into Rosetta@Home to enhance the computer’s capabilities. The team has brought a few top scoring players to the UW to observe their folding strategies.

"I am involved in something that has real relevance in the scientific world. It makes you very proud of what you do." — Charlie, player in England

"They were better players than anyone in our lab, and some used techniques that had never occurred to any of us," said Firas Khatib, a postdoctoral researcher in Baker's lab.

"People in the scientific community think Foldit is a great idea, but ask 'What can it produce in terms of results?' People are good at building things, so I'm expecting that people will be very good at building proteins," said Popović.

Seth Cooper says the next direction for Foldit is to design totally new proteins that don’t exist in nature, but may help cure diseases. Baker is challenging players to design one that might cure HIV. Medical researchers would use the new proteins to develop therapies. Other new proteins might help address environmental or energy problems.

"Some player designs have looked so good that they have been tested in the wet lab, and we’re working on making more of those," Cooper said.

Power of the Collective Brain

Foldit enlarges the scientific team. The Nature article credited the role of more than 57,000 players. Recent media coverage spurred a huge influx of new players, nearly quadrupling the registered number and still growing. In the 24 hours after NPR interviewed Popović, more than 4,300 signed on.

"It's great that Foldit has received wide recognition, due in no small part to the dedication of the players," Cooper said.

Other broad-based public scientific networks are searching for signs of intelligent life in the universe, looking for stardust, and classifying galaxies by shape. Any vestiges of the "lone scientist" myth are doomed.

"It's a new kind of collective intelligence, as opposed to individual intelligence, that we want to study," Popović said. "We're opening eyes in terms of how people think about human intelligence, and the possibilities when you get huge numbers of people together to solve a very hard problem. We hope the Nature paper will convince people who were sitting on the sidelines that the whole genre of scientific discovery games will really take off. Foldit will become part of a new Center of Game Science we have established in CSE."