One researcher combats cancer with the help of UW doctors and tools developed by his colleagues.

By: Chelsea Yates
Photos: Dennis Wise / University of Washington
Top image: Mike Averkiou, left, Barry Lutz, center, and Manjiri Dighe, right, during a recent contrast-enhanced ultrasound of Lutz's liver. The image on the left side of the screen depicts microbubble contrast agents in the blood flow of Lutz's liver, confirming the absence of metastatic lesions. The image on the right is a normal ultrasound image showing liver tissue.

On June 26, 2019, Barry Lutz received news no one wants to get: he had late stage colon cancer.

“It was a complete surprise,” the associate professor of bioengineering says. The median age for colon cancer diagnosis in men is 68; Lutz was 44. Neither he nor anyone in his family had a history of colon cancer.

Lutz’s care team, led by oncologist Eddie Marzbani at UW Medical Center - Northwest, set to work. Lutz had surgery to remove the cancer and spent the next three months in treatment.

Lutz finished chemotherapy and on December 22, he had a CT scan to serve as a clean baseline for future monitoring. The next day, he moved with his family to Texas to be near relatives and to resume a sabbatical, which had been interrupted by his cancer diagnosis. Things were looking up.

But a few days later, Dr. Marzbani called with bad news. Instead of clearing him, the CT scan showed a mass in his liver.

Though the scan could detect the mass, it couldn’t determine if the mass was malignant. So Lutz and his medical team were looking at a second surgery — in the liver this time. But it was risky. The mass appeared too big to remove completely and, if it was cancerous, the likelihood that cancer would spread was high. Plus, surgery could undermine Lutz’s already weakened immune system.

At this point, Lutz says, everything seemed “pretty dark.” A culture of collaboration 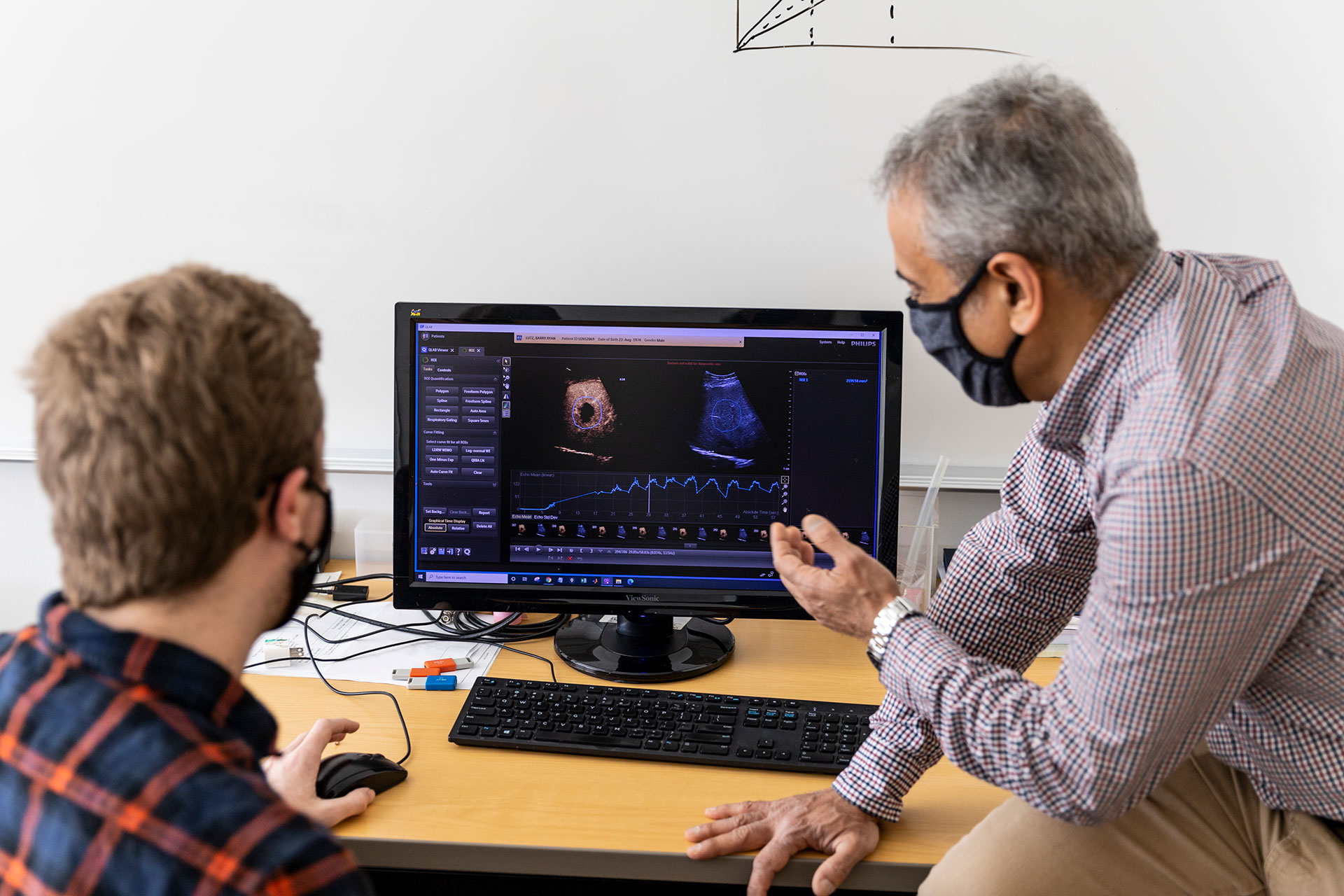 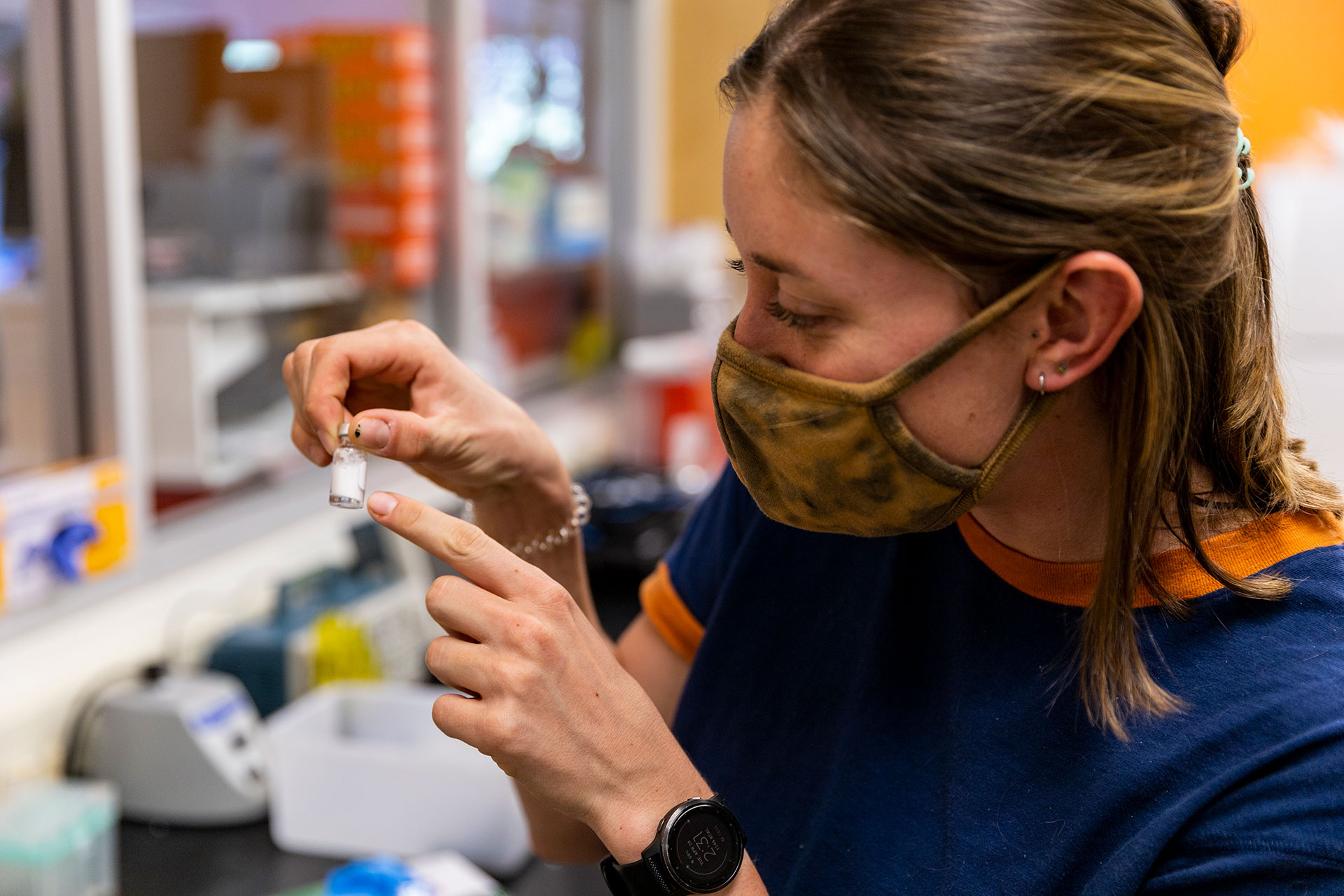 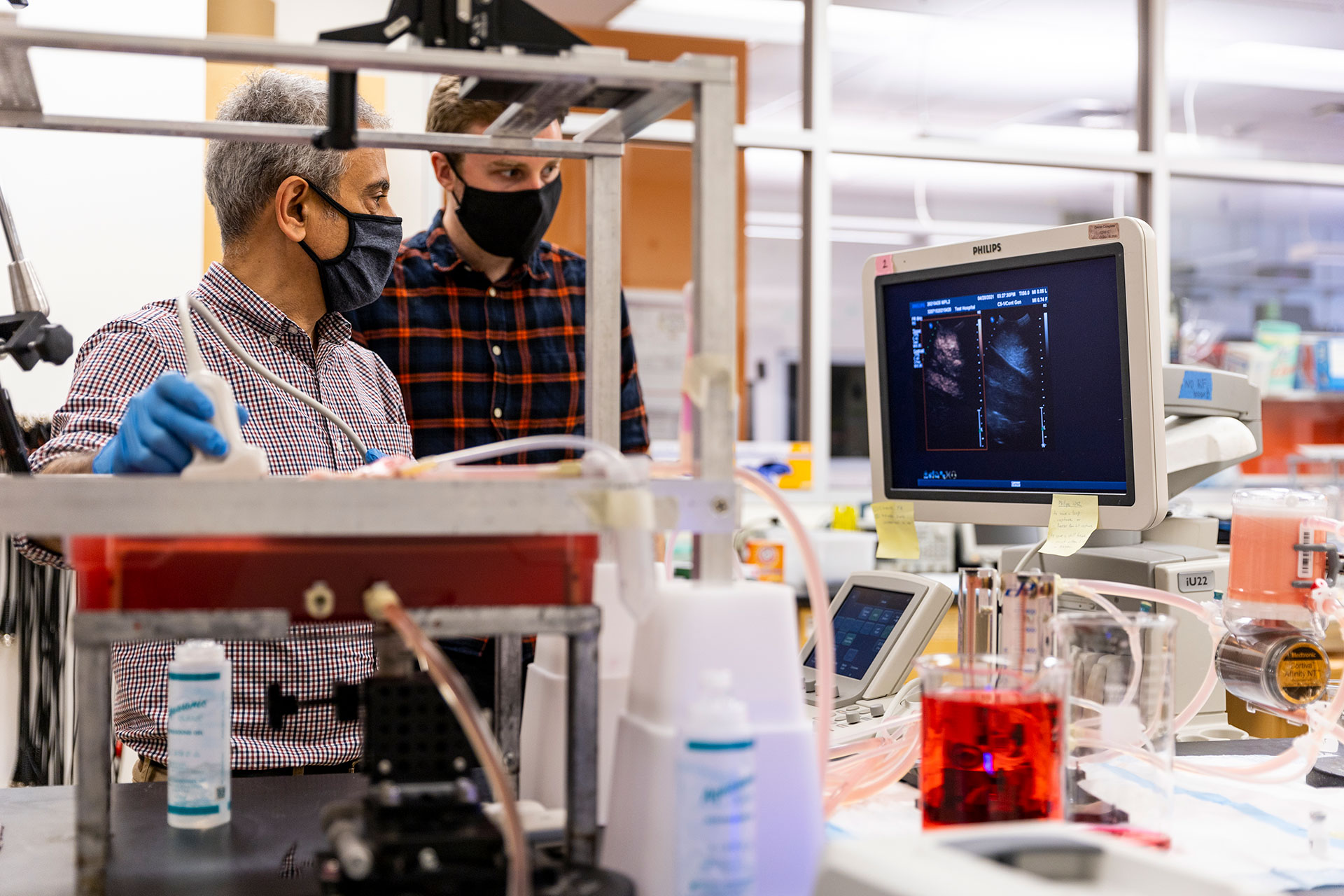 When bioengineering associate professor Mike Averkiou learned of his colleague’s diagnosis, he immediately offered to help. Averkiou has been developing contrast-enhanced ultrasound (CEUS) imaging for cancer diagnosis — with special emphasis on liver cancer — for over twenty years, first at Philips Ultrasound, then at the University of Cyprus and now in his UW lab. He partners with Dr. Manjiri Dighe in UW Radiology to transfer CEUS research from the lab to the clinic.

For CEUS, microbubbles similar in size to red blood cells are injected into a patient’s blood and travel through the bloodstream. They improve the contrast of images of organs and lesions during an ultrasound. Like contrast-enhanced CT and MRI scans, the most common imaging methods used today for cancer detection, CEUS provides doctors with important information about a tumor’s size and location. It also offers something that CT and MRI scans can’t: real-time quantifiable blood flow information.

Averkiou suggested a CEUS exam to characterize the mass in Lutz’s liver based on its vascular patterns: if the mass was metastatic, these patterns would be distinctively different than if it was benign. This information could help Lutz’s team decide whether or not to pursue the high-risk surgery.

Although contrast-enhanced ultrasound imaging has long been used across Europe and Asia to detect and monitor cancers, it’s fairly new to the U.S., having just been approved by the FDA for oncology (and only for liver cancer) in 2016. UW Medicine is one of the few sites in the country to offer it. Averkiou hopes this will change and wider CEUS adoption will follow.

“Not only does this method give us complementary information to traditional CT/MRI scans, but it’s less expensive and can be easily done at a patient’s bedside,” he says. “It doesn’t expose patients to radiation like CT scanning does and may be repeated as often as necessary. It’s not possible for a patient to have CT scans every three to four weeks to monitor cancer, such as when the patient is undergoing chemotherapy. That would be too much radiation.”

Based on the blood activity Averkiou was able to image and quantify, he determined that the mass was indeed a metastasis — critical information that led Lutz’s care team to biopsy and characterize the tumor to identify a new course of treatment.

The biopsy confirmed Averkiou’s findings, and Lutz’s care team contacted doctors Colin Pritchard, Eric Konnick and Steve Salipante in UW Lab Medicine & Pathology to run several tests, including the UW-OncoPlex panel. Developed by Pritchard, Salipante and collaborators, UW-OncoPlex is a genetic test used at UW Medicine and elsewhere to determine if immunotherapy or other targeted therapies might be an option for patients like Lutz. Immunotherapy facilitates the body’s own immune system to recognize, control and eliminate cancer cells, potentially providing long-term cancer control.

The tumor was growing fast and time was running out, so while waiting for test results, Lutz’s care team scheduled surgery to remove it and give him a bit more time to live. The night before the surgery, the team received the results: Lutz was a good candidate for immunotherapy.

“Based on the CEUS findings we made the critical decision to cancel the operation and pursue immunotherapy,” Lutz says. “Our rationale was surgery won’t save me because without an effective systemic treatment, tumors will likely pop up somewhere else, so we’ll do therapy and monitor the tumor. If the therapy works on this tumor, it will likely work on metastases we can’t see.”

“I have a lot to be thankful for at UW Medicine — from oncology to surgery and two great UW technologies. They all came together to give me a real gift.”

Lutz started immunotherapy on February 26, 2020. He flew back and forth between family in Austin and treatments in Seattle during the spring and summer of 2020 so his team could monitor the tumor by both CT scan and CEUS.

The news at first was disappointing: neither showed signs of tumor shrinkage, implying that the immunotherapy wasn’t working. But after only the second round, CEUS revealed something that the CT scan couldn’t.

“It showed that blood flow into the tumor was considerably reduced,” Averkiou explains. “This meant that, even though it hadn’t changed size, the tumor was regressing.”

“If we had relied only on the CT scans, we may have concluded that immunotherapy wasn’t working since the tumor wasn’t getting smaller. I would’ve thought we were teetering on the edge and that the tumor could start growing again any time,” he says. “Would we have changed therapy or stopped all together? I don’t know. Because of the ultrasound, we stayed the course, and I enjoyed time with family with more optimism.”

The team continued monitoring the tumor through treatment. It never shrank, but it also never regained blood flow. In September 2020, Dr. Jonathan Sham of the UW Liver Tumor Clinic removed it.

“It was baseball-sized and totally dead, just as the ultrasound showed,” Lutz recalls.

Today, a cancer-free Lutz is back in Seattle. He recently began a new project with Steve Salipante from the UW Lab Medicine & Pathology team; during his UW-OncoPlex testing the two discovered shared research interests. And Lutz continues to receive CEUS to watch that no tumors have returned.

“The contrast enhanced ultrasound and the UW-OncoPlex panel helped save my life,” he says. “I have a lot to be thankful for at UW Medicine — from oncology to surgery and two great UW technologies. They all came together to give me a real gift.”

The lab develops liver cancer imaging and treatment techniques based on ultrasound and micro-bubbles (CEUS) and partners with UW Radiology to evaluate the perfusion of liver tumors for earlier and more accurate detection based on vascular patterns. Aspects of this work were previously funded by the National Institutes of Health, U.S. Department on Defense and the European Commission. It is currently funded by the Brotman Baty Institute.