By Chelsea Yates
Photos by Dennis Wise / University of Washington EMAR is a social robot being developed by UW researchers to gather real-time data on teen stress.

“How many of you feel stressed at school?” When Elin Björling asks a group of Seattle high school students this question, every hand shoots in the air. 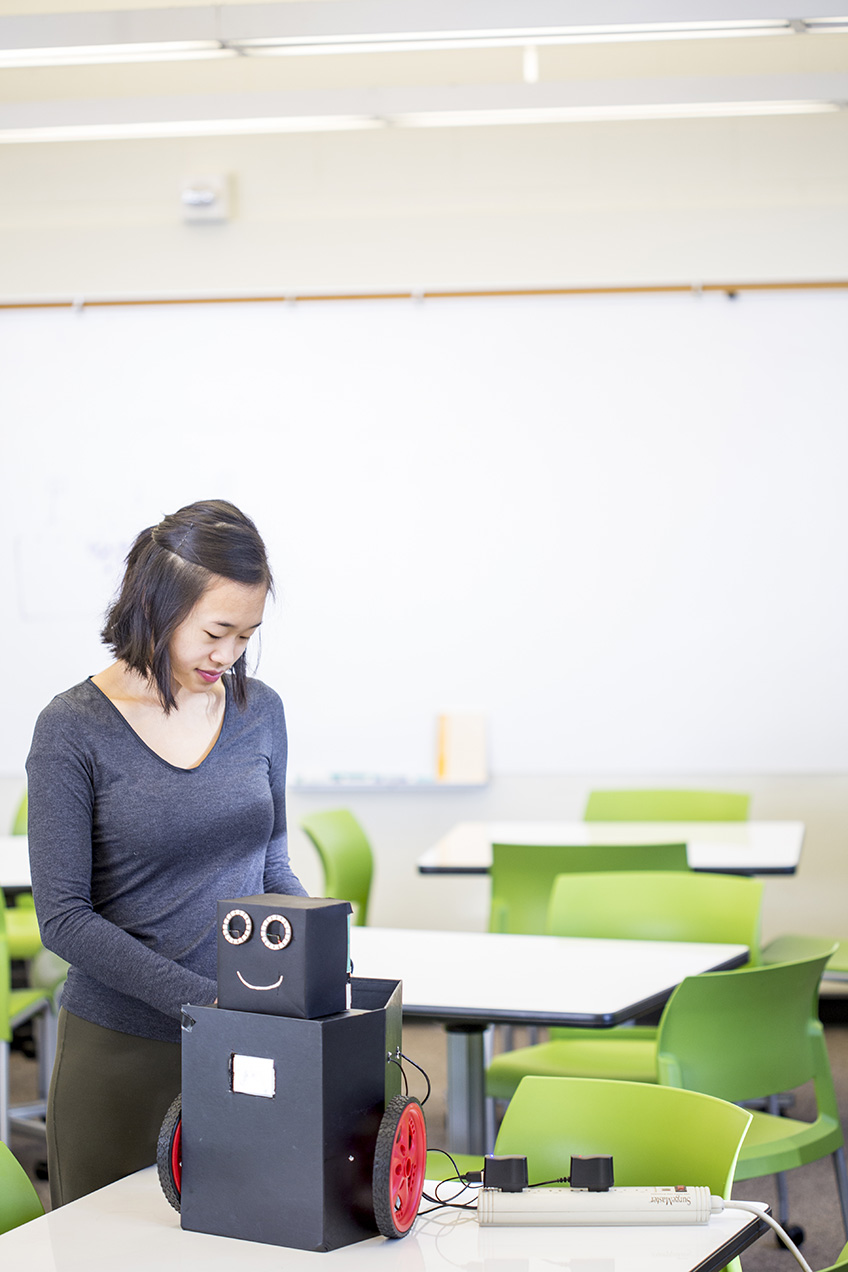 “Teens experience stress more so than any other age group, and that stress can negatively impact their mental and physical health,” she says.

Yet when it comes to stress research, more studies are needed to understand vulnerable adolescents. According to Björling, researchers lack quality data to understand how, when and why stress occurs in teens or what normal, healthy stress looks like.

Known as Project EMAR, their cross-campus, cross-disciplinary team of faculty, undergraduates and graduate students is creating a social robot that will help schools better measure and understand stress. The goal is to design a social robot who would live in a high school and collect data on students’ emotional well-being. The project is supported by the National Science Foundation’s National Robotics Initiative.

Why use a robot?

Although there is a great deal of research on human-robot interaction, including focused studies on specific age groups like children and seniors, little exists on teen-robot interaction. EMAR’s researchers see this as an opportunity.

“Today’s teens will likely be the first generation to spend a lifetime interacting with robots,” explains HCDE junior Wesley Muthemba, who has been involved with the EMAR project since Autumn 2017. “So in addition to gathering important data related to adolescent stress, our project will help fill in some human-robot interaction research gaps, which is exciting.”

Ideation — brainstorming, storyboarding visualizing — is a key step in human centered design. It allows researchers to formulate and articulate ideas and plans. 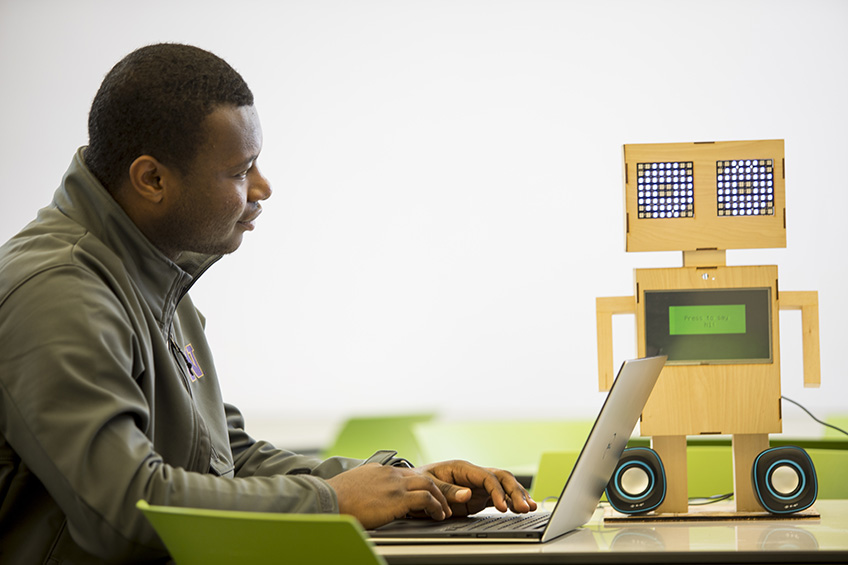 “The team realized early on that if we’re going to ask teens to share real-time feedback, we needed to provide them with a cool, interesting way to do so,” says HCDE junior Wesley Muthemba, here with the second EMAR prototype.

Muthemba is one of approximately 30 students who have helped shape Project EMAR through independent studies and directed research groups. Students from across the College of Engineering, the Information School and UW Tacoma have participated in all stages of research, design and robot prototyping.

The team is designing EMAR to use a research methodology called Ecological Momentary Assessment (EMA) to gather real-time data, which is where EMAR’s name comes from.

“The team realized early on that if we’re going to ask teens to share real-time feedback, we needed to provide them with a cool, interesting way to do so,” says Muthemba. “So why not give them a social robot to interact with?”

To ensure that EMAR’s end-users — high school students — will feel comfortable engaging with the robot, the team has held multiple user-focused sessions with teens. 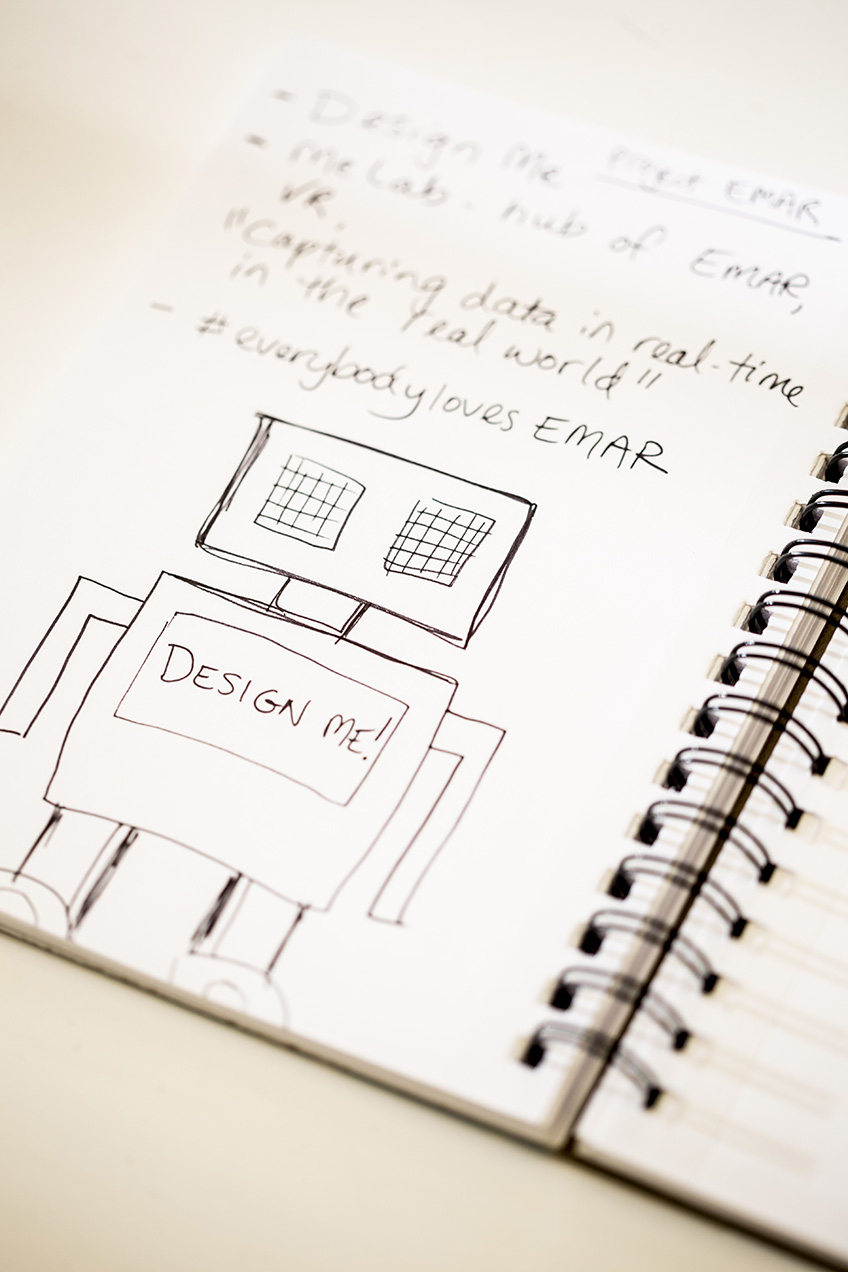 EMAR serves as an inspirational outreach and teaching tool, encouraging high school students to envision themselves as robot designers.

“High school wasn’t that long ago for me, and I thought I had a good idea of how the teens would respond,” says HCDE junior Rachel Ren, the project’s undergraduate research assistant. “But one of the first things we learn in HCDE is to let go of our assumptions and listen objectively, and I’m glad we’ve taken this approach because we’ve learned so much!”

For example, the team discovered that the students overwhelming preferred simple, approachable robot designs to sophisticated models, which could seem intimidating.

“Over and again, we’ve been told that EMAR has to be cute, not creepy,” says Rose.

Based on teen input, the team has created two robot prototypes and is working on two more. EMAR’s first iteration, a squatty, boxy robot, has large round static eyes and a simple, hand-drawn smile. The second is taller with dynamic, digitally responsive eyes. Both feature a touch screen for information gathering.

Teens also reported a desire to know that EMAR cares about them, which Rose says, has been interesting to think about in terms of robot design.

“What does it mean to care? How do you communicate that in a robot? Doing so has been a major focus of our recent prototyping,” she adds.

To convey awareness and expression, researchers have scripted EMAR’s eyes to move and blink. They’ve also programmed EMAR to respond verbally to teen input and are exploring the best types of verbal responses for it deliver.

“Do students want EMAR to suggest solutions that might help them feel better, or do they just want to be heard? What should EMAR’s voice sound like? These are some of the big questions that we’re thinking about right now,” says Rose.

The researchers have also learned that students are curious about EMAR’s race and gender.

“It never crossed our minds to design for race or gender, but it’s been interesting to observe how soon students want to know if EMAR is a boy or a girl,” says Björling. “This has prompted us to think about how race and gender are communicated and, as designers, how mindful we need to be about our roles in that process.”

Using a robot to collect information about students raises privacy concerns. To address this, the data will be collected and stored anonymously.

“EMAR is an assessment tool,” explains Björling. “It isn’t intended to single out specific individuals but to compile and aggregate data that schools can use to better understand their student body as a whole.”

School administrators and teachers will be able to use EMAR’s data to determine ways to implement change — introduce a new after-school program, host wellness events, increase counseling services, reduce students’ academic workload — and measure the effectiveness of that intervention. It can also help teens develop more self-awareness and a deeper understanding of their school environment. 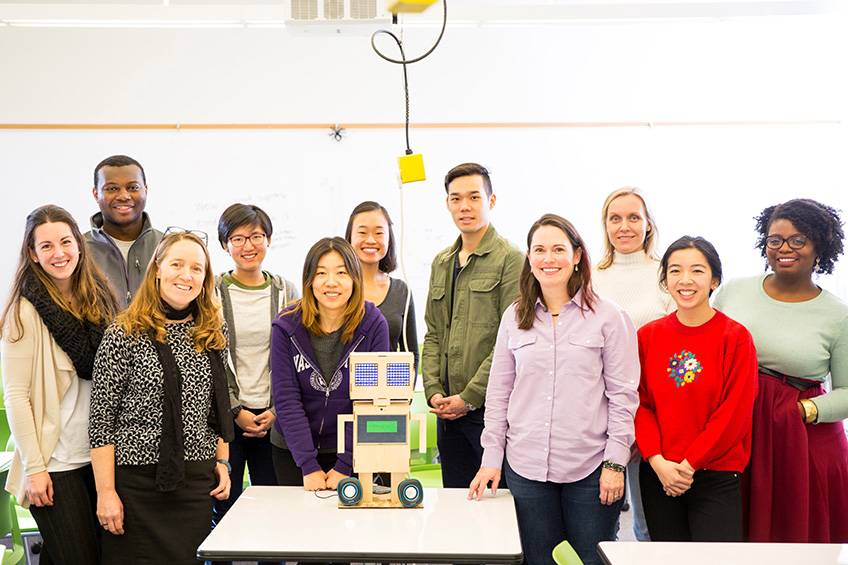 “EMAR will serve as a good reminder for teens to take a minute and pay attention to their stress, to talk to their friends or a counselor about it,” Björling adds.

In the meantime, EMAR is proving to be an inspirational outreach and teaching tool, encouraging high school students to envision themselves as robot designers. This winter, students from seven Puget Sound high schools have been participating in a social robot design challenge in which they’ve designed and created robot prototypes to live in their schools and help students deal with stress. They shared their robots in a Design Challenge Showcase this spring.

“Developing EMAR with high school students has been one of the best parts of Project EMAR,” says Ren. “The teens involved with EMAR are our collaborators and co-designers, not just our end-users. And we couldn’t be doing this work without them.”