Eric Chudler has traveled to India nearly every year since 2011 to teach neuroscience to Tibetan Buddhist monastics through the “Science for Monks” educational program.

Palpung Sherabling is not an easy place to reach. The Tibetan Buddhist monastery is nestled in northern India’s Kangra Valley near the village of Bir. Surrounded by 30 acres of pine forest and against a backdrop of the Himalayas, it’s about a three-hour drive from Dharamsala, the nearest city. Like other Tibetan settlements in India, it’s a remote site, serving to preserve and advance Tibetan Buddhism by educating the next generation of monks and nuns. 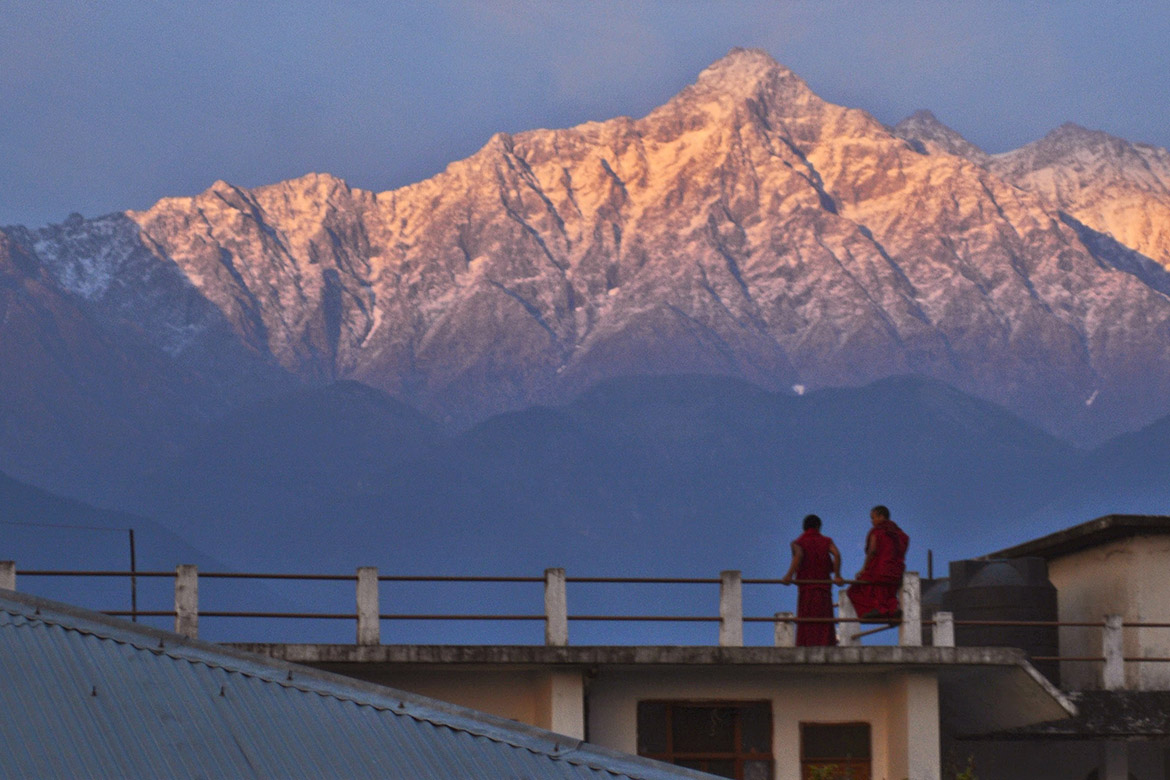 Tibetan settlements in India serve to preserve and advance Tibetan Buddhism by educating the next generation of monks and nuns. 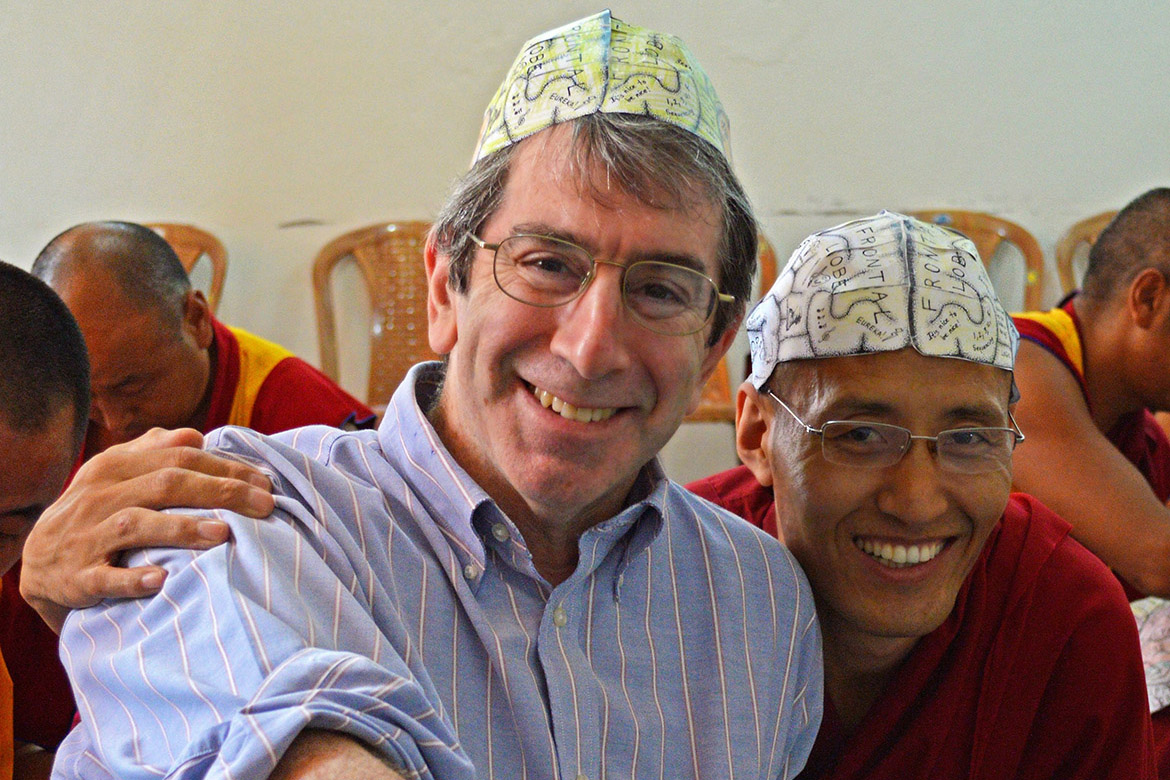 Chudler and a student show off their “brain hats.” To introduce brain anatomy, Chudler has the class construct these hats from a template and color the four lobes.

This monastery is one of several that bioengineering research professor Eric Chudler has visited as part of Science for Monks, a program connecting scientists and educators with the exiled Tibetan monastic community. It is a product of the Dalai Lama’s interest in integrating western science into the curriculum for Tibetan Buddhist monks and nuns. Since 2011, Chudler — who serves as executive and education director of the Center for Sensorimotor Neural Engineering (CSNE) — has made six trips to colleges and monasteries across India to teach introductory neuroscience classes for it.

“Buddhist monastics receive a tremendous amount of education — especially philosophical training in logic and debate and in contemplative practices like meditation — but they don’t have much exposure to western science,” he explains. “Because of Buddhism’s deep exploration of consciousness and the mind, neuroscience has become a key point of intersection.”

“…[A] dialogue between neuroscience and society could have profound benefits in that it may help deepen our basic understanding of what it means to be human and our responsibilities for the natural world we share with other sentient beings.”

Eric Chudler and Laura Specker Sullivan with their students at Palpung Sherabling.

Chudler was invited to participate in Science for Monks in part because of his work with Neuroscience for Kids, an online resource he launched in 1996 to help middle school teachers teach kids about the brain and nervous system.

“It seemed like a good challenge, which meant it was a good opportunity,” he says. He accepted immediately.

Why teach neuroscience to monks?

How do brains work? What are thoughts? Where do emotions come from? Why are we self-aware? Although their approaches differ — neuroscientists rely on observation and empirical data to inform their conclusions while Buddhists draw from personal experiences with meditation and mindfulness — both have long been investigating these questions to better understand the nature of the mind. 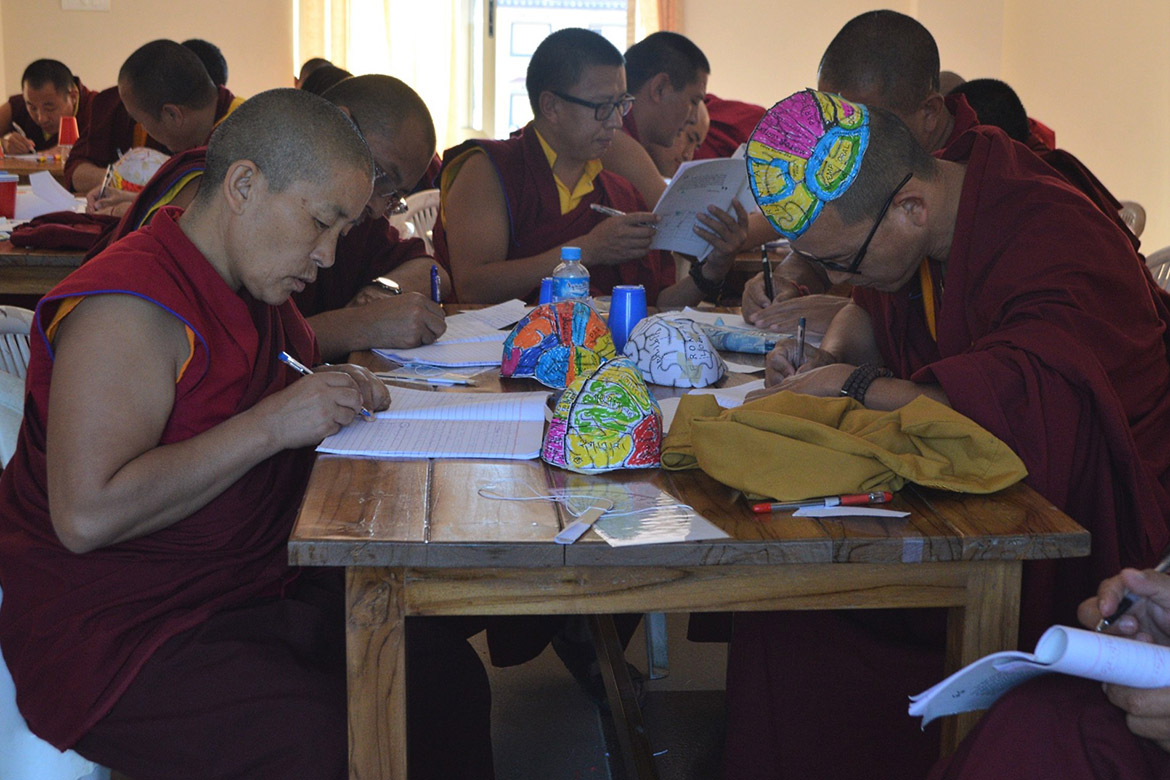 “The Science for Monks students are some of the best students I’ve ever taught,” Chudler says. “Their thirst for knowledge is fantastic, and their questions push me to think about my work in new ways.”

“We all have brains and nervous systems, we’re equipped with sensory organs and ways to process what we feel, hear, see and so on,” Chudler says. “Basically, we’re all walking talking laboratories and can explore and test within ourselves.”

In this way, Chudler’s approach to teaching neuroscience aligns with Tibetan Buddhism’s emphasis on first-person study of conscious experience. He begins his classes with introductory material — lessons about brain anatomy, the nervous system and general physiology – and combines his lectures with interactive activities designed to demonstrate brain function and its role in controlling the senses, learning, memory and perception.

Translation tends to present the biggest challenge; the monks and nuns speak little English, and Chudler speaks no Tibetan, so he relies heavily on translators and in-class demonstrations. He draws from his Neuroscience for Kids curriculum and outreach activities developed through the CSNE; both provide a solid foundation for anyone new to neuroscience, children and adults alike.

“In the lecture portion of a class, with the help of a translator, I present a concept — a sensory experience, for example, such as the sense of touch — and explain the pathway involved from physical touch to sensation,” he says. “Then we break into small groups to experiment with related activities, such as testing reflexes or mapping the sensitivity of the skin on different places of the body.”

His favorite lessons are those that encourage friendly competition.

“The monks are surprisingly competitive and like games in which they can compete against each other in a lighthearted way,” he says.

“Tibetan Buddhist monastics rely on memorization and recitation to learn spiritual teachings,” he explains. “As a result, many of my monastic students have incredibly sharp memory skills, which has been fascinating to observe.” 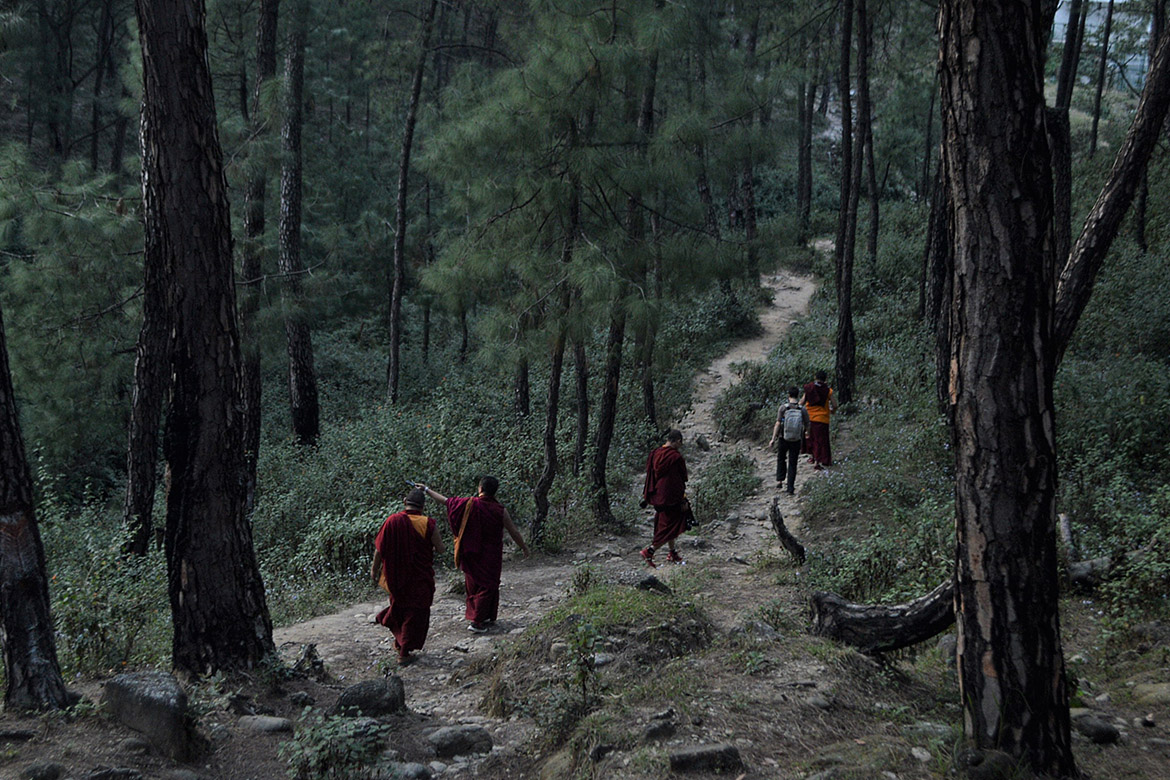 Specker Sullivan joins monks on a walk through the forest surrounding the Sherabling monastery.

Chudler also incorporates neuroethics — an exploration of the ethical issues that arise from neuroscience and neural engineering technologies — into his classes.

“The Tibetan monastic community has been investigating the nature of mind for hundreds of years,” he says. “The monastics have a lot to say about it but their voice has not been heard by western researchers, so in many ways, they represent an untapped community of thinkers on this subject.”

In late 2016, Chudler introduced then-CSNE post-doctoral researcher Laura Specker Sullivan to Bryce Johnson, the director of Science for Monks. Specker Sullivan’s background is in cross-cultural bioethics and philosophy, and Johnson invited her to develop a class on issues and debates in western neuroethics to complement Chudler’s neuroscience class. While teaching in India, she also conducted several ethnographic studies with the monks and nuns to understand their philosophical approach to addressing ethical issues. 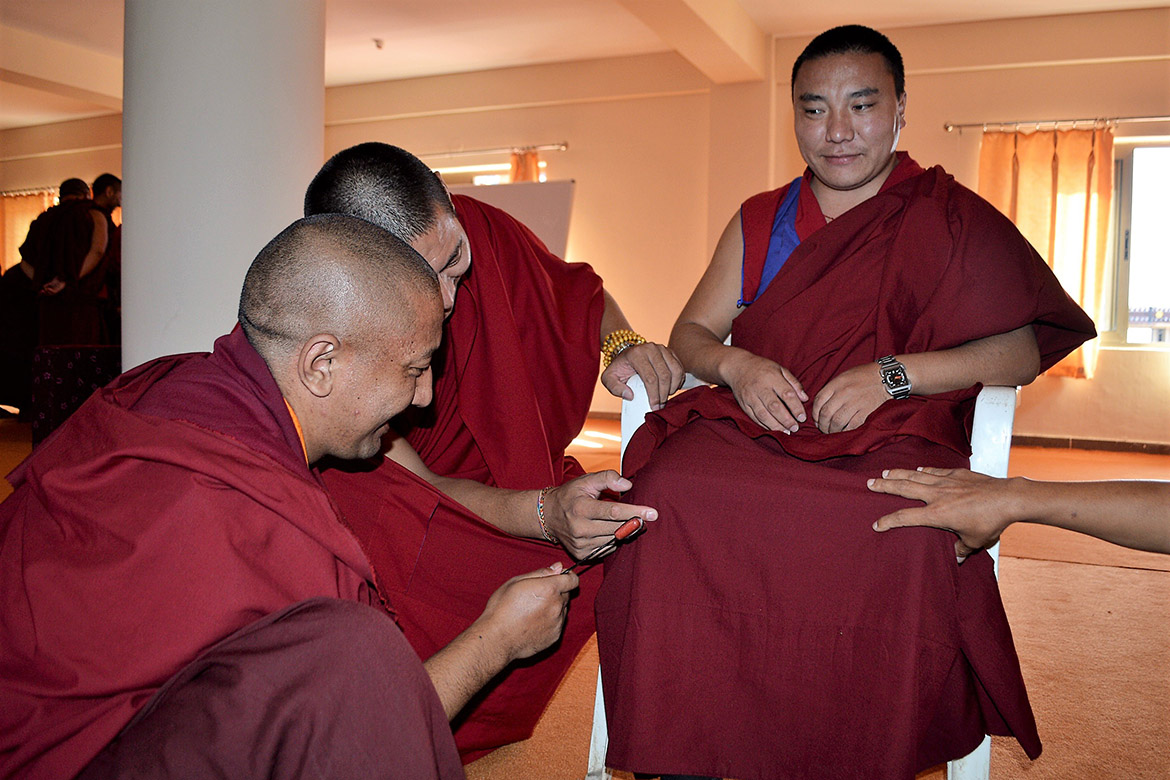 After a lecture on the sensation of touch and reflexes, the monks take turns testing each other’s knee jerk reflex. 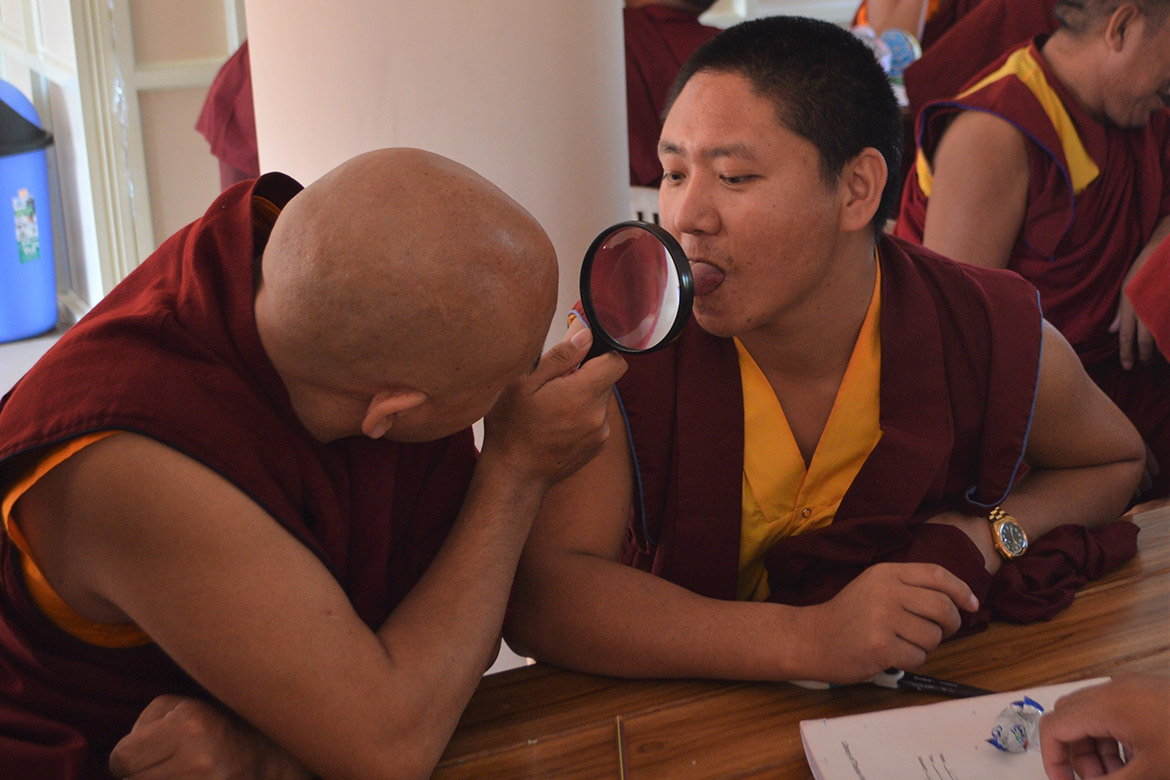 The monks use magnifying glasses to investigate their taste buds in a lesson about taste and smell. 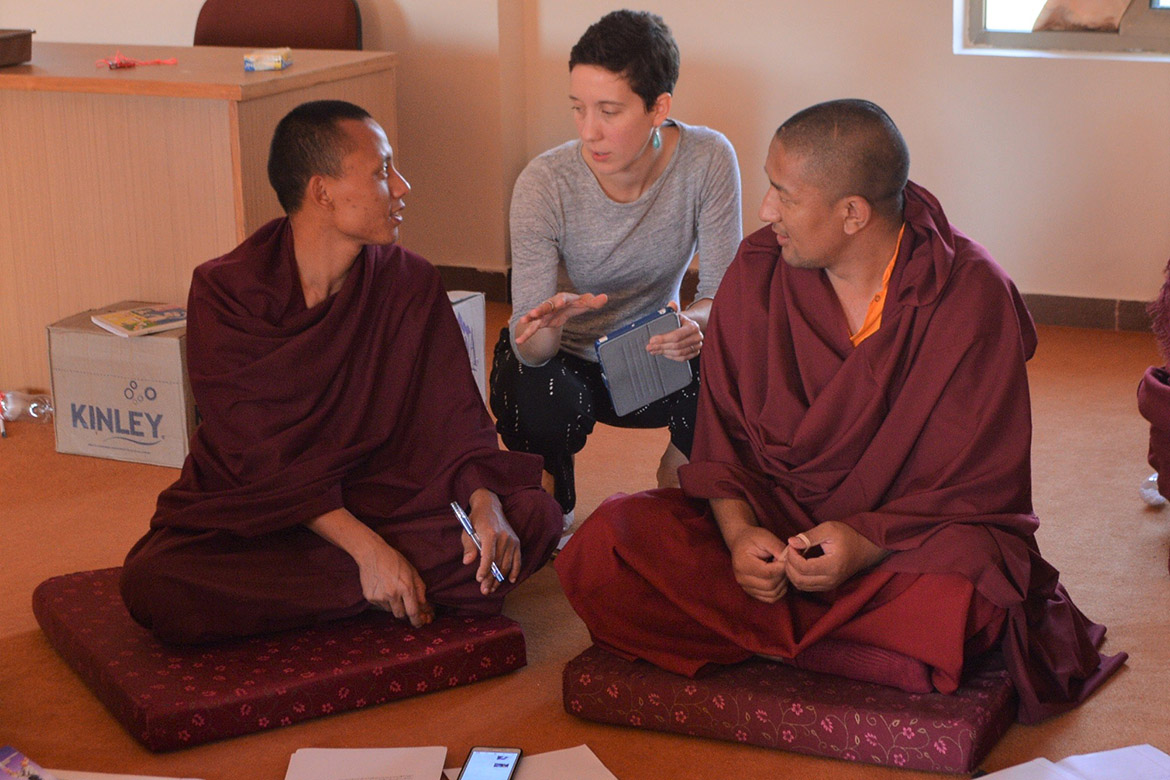 Specker Sullivan has conducted ethnographic studies with the monastics to understand their philosophical approach to addressing ethical issues. 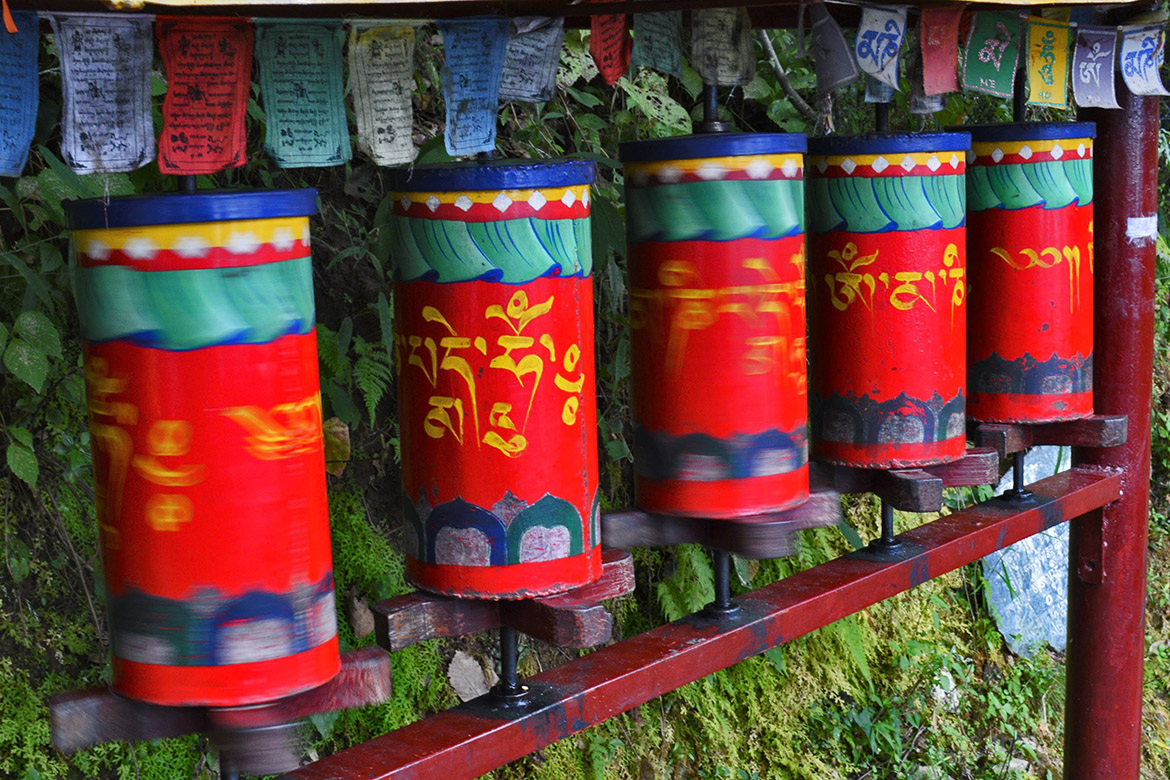 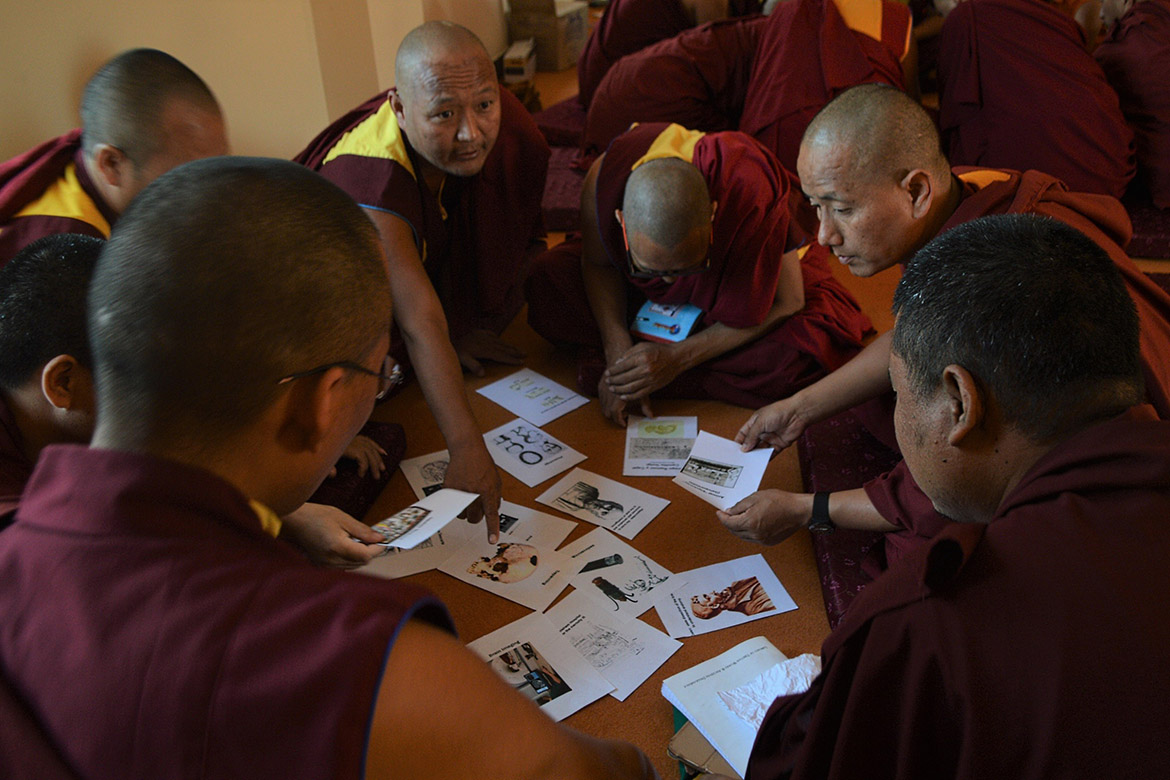 In this activity, the monastics chronologically arrange notable events in the history of neuroscience research.

“I’m interested in articulating this approach in a way that’s helpful for scientists and ethicists who are trying to work through these issues in their own research,” she explains.

Now at Harvard Medical School’s Center for Bioethics, she plans to publish her findings in the coming year.

While there are fundamental differences between Buddhism’s and neuroscience’s foundational principles — for example, Buddhists believe that the brain and mind are separate, whereas western neuroscience understands the mind as a product of the brain — both Chudler and Specker Sullivan agree that, just as the monastics benefit from exchanging ideas with western scientists, so, too, do the scientists.

“The Science for Monks students are some of the best students I’ve ever taught,” Chudler says. “Their thirst for knowledge is fantastic, and their questions push me to think about my work in new ways.”

“Because of Buddhism’s deep exploration of consciousness and the mind, neuroscience has become a key point of intersection.”

Many of the teachings he’s developed through Science for Monks have helped inform CSNE outreach activities. And, though not his areas of study, Chudler notes the recent growth of scientific interest in exploring the effects that core Buddhist practices may have on the brain and body. For example, at places such as Stanford University’s Center for Compassion and Altruism Research and Education and the University of Wisconsin-Madison’s Center for Healthy Minds, researchers are investigating meditation’s effect on the brain and conducting scientific studies on compassion and altruistic behavior.

Specker Sullivan also sees value in the ways that western science and Tibetan Buddhism push each other to define the values and the assumptions that underlie each’s methodological structure. 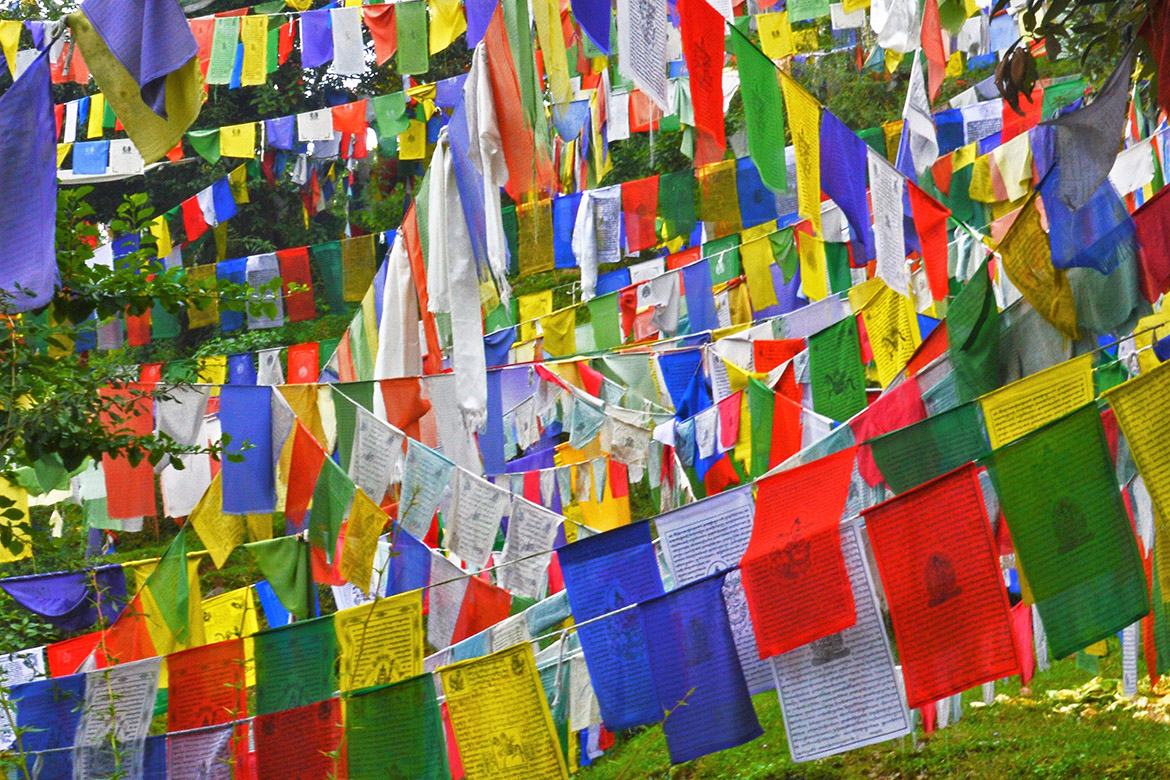 “In my mind, Buddhism challenges western science to articulate its goals: Does science improve society? If so, in what ways? Similarly, science challenges Buddhism to provide rigorous evidence for some of its claims. For example, could the idea of reincarnation be supported scientifically, and if so, how?” she asks.

Above all, both believe that more forward-thinking collaborations and open discussions between scientific and Tibetan Buddhist communities will bring new understanding to the nature of mind, ultimately benefitting monastics and neuroscientists alike.

“Science has so many unanswered questions, so the more diverse viewpoints and perspectives we can bring to the conversation, the more we’ll advance the field,” Chudler says.

Learn more about Chudler’s work with Science for Monks.