Aerospace engineer, astrobiologist, navy pilot, educator and mentor — by the time she completes her doctoral degree next year, these entries will all appear on Osazonamen Igbinosun’s resume.

At the UW, Igbinosun has combined her passion for engineering, aviation and space through a dual Ph.D. program in aeronautics and astronautics (A&A) and astrobiology. Her research explores how to use resources found on astronomical bodies such as the moon, Mars and asteroids so that when humans begin visiting these extraterrestrial sites they won’t need to transport as many materials from Earth. Igbinosun is specifically interested in figuring out how to extract water from the subsurface of Mars.

Similar to a space mission, her research journey has been rigorous, layered and complex.

“It took me a while to realize that all of my life experiences to this point have prepared me for where I am today,” she says. “With A&A, I’ve found the research and support that has made the journey worth it.”

The daughter of Nigerian immigrants, Igbinosun entered the U.S. Navy’s aviation program after completing the Naval Reserve Officers Training Corps at the University of Rochester. During flight training, she was on track to fly multi-engine aircraft but received a unique opportunity to pilot C-130 “Hercules” military transport planes in the Navy Reserves. The only African-American female pilot on her military base — and one of the few in her current research area — she is committed to encouraging young women of color in aviation and STEM fields.

We recently talked with Igbinosun about her path to engineering and her passion for supporting underrepresented communities in STEM, which she does by volunteering at the UW Women’s Center.

How did you become interested in aerospace engineering and astrobiology?

“The fun part of my work is getting to recreate the environment of Mars in the lab and build customized chambers to take measurements,” Igbinosun says.

As a kid, I loved science fiction — it inspired me to wonder if things like interstellar travel and extraterrestrial life could become reality, which led me to pursue science and engineering.

I majored in physics and astronomy in undergrad and then completed a master’s degree in earth and space sciences (ESS) at the UW. Through that experience, I became interested in studying the future of life in the universe, especially human interaction with extraterrestrial environments. When I realized that I wanted to develop sustainable systems to support human missions to other planets, I decided to pursue UW’s A&A program. It was one of the best decisions I ever made and the perfect way to combine my backgrounds in physics, astronomy and planetary science with engineering.

My adviser, A&A professor Adam Bruckner, is affiliated with UW’s Astrobiology program; in addition to guiding me in my research, he’s supported me through the process of pursuing a dual-title Ph.D. Although several universities offer undergraduate astrobiology courses, the UW is one of the few to offer graduate level training in astrobiology, which takes place through partnerships with affiliated UW doctoral programs, like A&A, ESS, astronomy, oceanography and others. 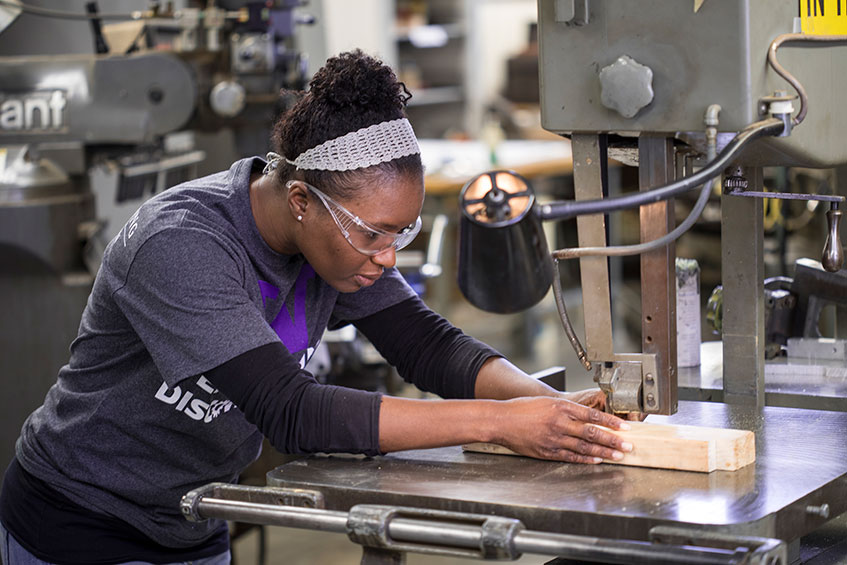 “My dream is to work at NASA’s Jet Propulsion Laboratory. The research taking place there is the cutting edge of aerospace, and I’d love to develop instrumentation for a planetary mission,” says Igbinosun.

Before coming to the UW, you served as a U.S. Navy pilot. How did that experience prepare you for graduate school?

Flight training and graduate level research are very similar. They’re both rigorous, intensive and require perseverance. My time in the Navy taught me a lot — from developing self-confidence to learning how to deal with adversity — and was a constant reminder to think beyond perceived limitations, push through insecurities and strive for excellence. Above all, it instilled in me the importance of planning, problem-solving and preparing for the next challenge.

Tell us about your current research.

I’m investigating how to extract water from the soil of Mars using high-frequency microwave radiation. My work stems from a desire to understand how we can utilize the indigenous resources of Mars to support human and robotic missions, also known as in-situ resource utilization (ISRU). This way, when we start visiting Mars, we won’t need to rely solely on bringing water with us; resources already there can be used to make life support consumables — oxygen, water and food — and rocket propellant.

As far as we know there are no stable sources of liquid water on the surface of Mars, but we expect to find near-surface ice deposits in certain areas. High-frequency microwave radiation doesn’t generate heat as well with ice as it does with components of the soil. So, as the soil is heated, the ices will transition to water vapor. In my work, I seek to understand this interaction and perform experiments to determine how much water we could extract from the subsurface. The fun part is getting to recreate the environment of Mars in the lab and build customized chambers to take measurements. 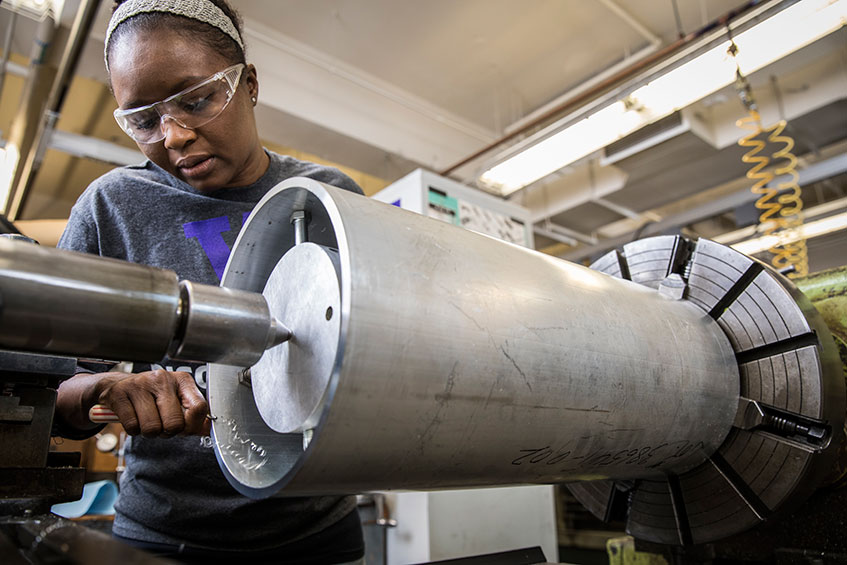 Igbinosun uses the lathe in A&A’s Bossart Machine Shop to create a clean finish on the face of an aluminum cylinder, which will contain samples at the low pressures found on Mars. 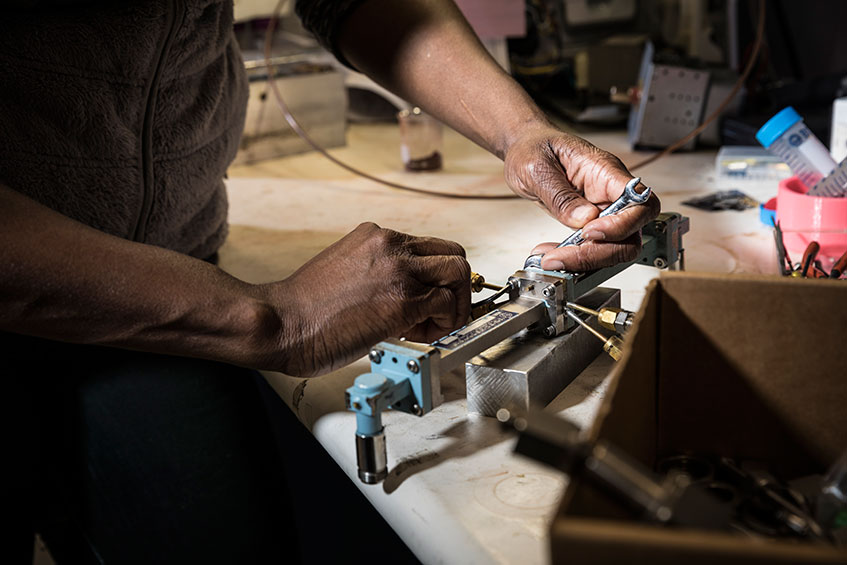 Microwave radiation is directed to the soil samples via high frequency waveguides, such as the one that Igbinosun works on here.

What are your plans after you finish your Ph.D.?

My dream is to work at NASA’s Jet Propulsion Laboratory. The research taking place there is the cutting edge of aerospace, and I’d love to develop instrumentation for a planetary mission. I also hope to contribute in developing systems that will support human missions to the moon, Mars and beyond!

In addition to your academic commitments on campus, you volunteer with Making Connections. What does that involve?

Making Connections is a college readiness program through the UW Women’s Center for high school students from low-income backgrounds who want to pursue STEM fields in higher education. Most of the students are young women of color, first-generation Americans and the first in their families to attend college.

I tutor students in math and help them prep for their SATs. I’ve also given presentations about my experiences as a pilot and an engineer; for example, when the film Hidden Figures came out, I joined other women working in aviation and the aerospace industry to talk with students about our educational pathways, challenges and successes. 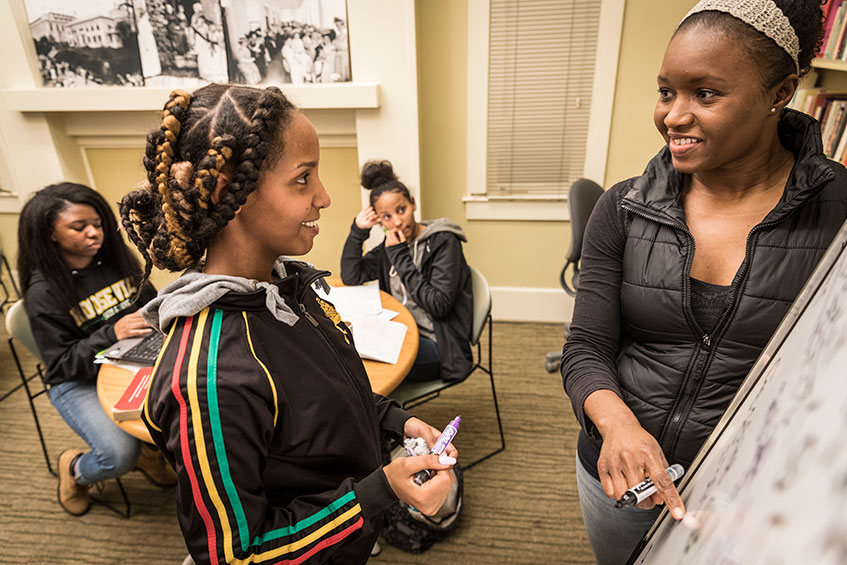 In addition to her academic commitments, Igbinosun tutors students in math and helps them prepare for the SATs through Making Connections, a college readiness program at the UW Women’s Center.

Why do you make time to volunteer?

Because it’s important to encourage young women to do whatever what they want — whether it’s flying airplanes, becoming engineers, studying planetary science or serving our country. It’s also important to be honest and help them set realistic expectations. The fact is that there are few women in the fields I’ve been in. For women of color, the numbers are even less. And unfortunately this can lead to challenges that can distract us from our goals. In my military experience, for example, it was common to encounter people who had specific ideas of what a woman’s role should be, and generally, those ideas didn’t include piloting aircraft or leading men. As an African-American woman, I often felt that I had to work twice as hard as other women, prove my value and present myself in a way that was more palatable for those around me.

I am so thankful to those who have inspired and supported me along the way. I volunteer because it gives me an opportunity to give back, and hopefully that helps us all move forward.