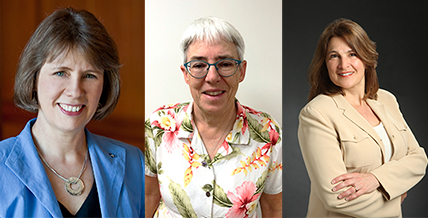 They own their own engineering companies, have each been named "Engineer of the Year" by the American Council of Engineering Companies-Washington chapter, and now these three civil and environmental engineering alumnae have one more thing in common: establishing a scholarship fund.

The three alumnae, Amy Haugerud, ’77 B.S., Anne Symonds, ’75 B.S., ’78 M.S., and Kristen Betty, ’83 B.S., joined forces in May 2016 to establish the Women Business Founders’ Endowed Scholarship Fund in Civil & Environmental Engineering. The scholarship will support undergraduate students who are passionate about advancing the interests of women in the field, especially the business side of engineering.

"I want the nature of the endowment, in that it was established by women who founded successful companies, to be a reminder that women have a place in the business side of engineering," Haugerud said.

The three business owners have, over the years, followed very similar career paths. After working for a number of years in industry, each decided to take a risk and found an engineering company. In the 1980s, this was largely unheard of, with the majority of engineering firms owned by men.

“I want the nature of the endowment, in that it was established by women who founded successful companies, to be a reminder that women have a place in the business side of engineering.”

Two of the women, Haugerud and Symonds, first met in 1983. Shortly after Haugerud started RoseWater Engineering, she contacted Symonds, who had founded Symonds Consulting Engineers three years earlier. Symonds’ company was the first female-owned firm of its kind registered in Washington state. Both businesses grew quickly when a new state law, effective in 1983, mandated public agencies and schools contract a percentage of their work to minority and women-owned businesses. Rather than view one another as competition, the women quickly became allies.

"We became friends and supported each other as we faced the various challenges that come with owning a business," Haugerud said. 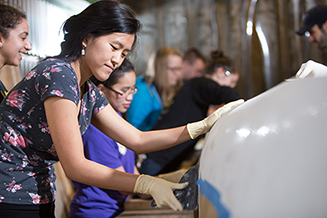 The CEE department plans to award the first scholarship from this fund in 2017.

For more information about the Campaign for Engineering, or to make a gift, please contact: