Gamers have devoted countless years of collective brainpower to rescuing princesses or protecting the planet against alien invasions. This week researchers at the University of Washington will try to harness those finely honed skills to make medical discoveries, perhaps even finding a cure for HIV.

A new game, named Foldit, turns protein folding into a competitive sport. Introductory levels teach the rules, which are the same laws of physics by which protein strands curl and twist into three-dimensional shapes -- key for biological mysteries ranging from Alzheimer's to vaccines.

After about 20 minutes of training, people feel like they're playing a video game but are actually mouse-clicking in the name of medical science. The free program is at http://fold.it.

"We're hopefully going to change the way science is done, and who it's done by," said Popović, who presented the project today at the Games for Health meeting in Baltimore. "Our ultimate goal is to have ordinary people play the game and eventually be candidates for winning the Nobel Prize." 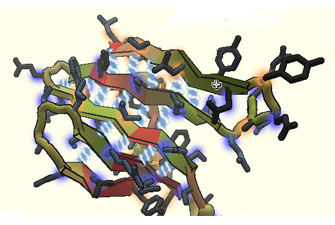 Proteins, of which there are more than 100,000 different kinds in the human body, form every cell, make up the immune system and set the speed of chemical reactions. We know many proteins' genetic sequence, but don't know how they fold up into complex shapes whose nooks and crannies play crucial biological roles.

Computer simulators calculate all possible protein shapes, but this is a mathematical problem so huge that all the computers in the world would take centuries to solve it. In 2005, Baker developed a project named Rosetta@home that taps into volunteers' computer time all around the world. But even 200,000 volunteers aren't enough.

"There are too many possibilities for the computer to go through every possible one," Baker said. "An approach like Rosetta@home does well on small proteins, but as the protein gets bigger and bigger it gets harder and harder, and the computers often fail.

"People, using their intuition, might be able to home in on the right answer much more quickly."

Rosetta@home and Foldit both use the Rosetta protein-folding software. Foldit is the first protein-folding project that asks volunteers for something other than unused processor cycles on their computers or Playstation machines. Foldit also differs from recent human-computer interactive games that use humans' ability to recognize images or interpret text. Instead, Foldit capitalizes on people's natural 3-D problem-solving skills.

The intuitive skills that make someone good at playing Foldit are not necessarily the ones that make a top biologist. Baker says his 13-year-old son is faster at folding proteins than he is. Others may be even faster.

"I imagine that there's a 12-year-old in Indonesia who can see all this in their head," Baker says.

Eventually, the researchers hope to advance science by discovering protein-folding prodigies who have natural abilities to see proteins in 3-D.

"Some people are just able to look at the game and in less than two minutes, get to the top score," said Popović. "They can't even explain what they're doing, but somehow they're able to do it."

The game looks like a 21st-century version of Tetris, with multicolored geometric snakes filling the screen. A team that includes a half-dozen UW graduate and undergraduate students spent more than a year figuring out how to make the game both accurate and engaging. They faced some special challenges that commercial game developers don't encounter.

"We don't know what the best result is, so we can't help people or hint people toward that goal," Popović explained. The team also couldn't arbitrarily decide to make one move worth 1,000 bonus points, since the score corresponds to the energy needed to hold the protein in that shape.

Almost 1,000 players have tested the system in recent weeks, playing informal challenges using proteins with known shapes. Starting this week, however, the developers will open the game to the public and offer proteins of unknown shapes. Also starting this week, Foldit gamers will face off against research groups around the world in a major protein-structure competition held every two years.

Beginning in the fall, Foldit problems will expand to involve creating new proteins that we might wish existed -- enzymes that could break up toxic waste, for example, or that would absorb carbon dioxide from the air. Computers alone cannot design a protein from scratch. The game lets the computer help out when it's a simple optimization problem -- the same way that computer solitaire sometimes moves the cards to clean up the table -- letting the player concentrate on interesting moves.

Eventually, the researchers hope to present a medical nemesis, such as HIV or malaria, and challenge players to devise a protein with just the right shape to lock into the virus and deactivate it. Winning protein designs will be synthesized in Baker's lab and tested in petri dishes. High-scoring players will be credited in scientific publications the way that top Rosetta@home contributors already are credited for their computer time.

"Long-term, I'm hoping that we can get a significant fraction of the world's population engaged in solving critical problems in world health, and doing it collaboratively and successfully through the game," Baker said. "We're trying to use the brain power of people all around the world to advance biomedical research."

Foldit includes elements of multiplayer games in which people can team up, chat with other players and create online profiles. Over time the researchers will analyze people's moves to see how the top players solve puzzles. This information will be fed back into the game's design so the game's tools and format can evolve.

Objective: To develop a new genre of science-centric serious games, including games that lead to scientific discoveries in biochemistry with implications towards curing diseases, discovering vaccines, and developing novel biofuels.

"We're trying to use the brain power of people all around the world to advance biomedical research."
- David Baker, UW professor of biochemistry