In the world of underwater robots, this is a team of pioneers. While most ocean robots require periodic communication with scientist or satellite intermediaries to share information, these can work cooperatively communicating only with each other. 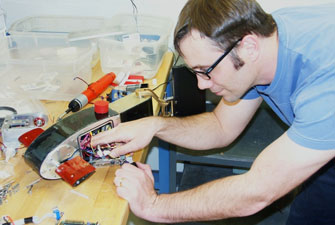 Over the past five years Kristi Morgansen, a UW assistant professor of aeronautics and astronautics, has built three Robofish that communicate with one another underwater. Recently at the International Federation of Automatic Control's Workshop on Navigation, Guidance and Control of Underwater Vehicles, she presented results showing that the robots had successfully completed their first major test. The robots were programmed to either all swim in one direction or all swim in different directions, basic tasks that can provide the building blocks for coordinated group movement. This success in indoor test tanks will eventually provide the basis for ocean-going systems to better explore remote ocean environments.

"Underwater robots don't need oxygen. The only reason they come up to the surface right now is for communication," Morgansen said.

Her robots would not need to come to the surface until their task was complete. They could cooperatively track moving targets underwater, such as groups of whales or spreading plumes of pollution, or explore caves, go underneath ice-covered waters, or into) dangerous environments where surfacing might not be possible. Schools of robots would be able to work together to do things that one could not do alone, such as tracking large herds of animals or mapping expanses of pollution that can grow and change shape.

Co-authors on the recent paper were doctoral students Daniel Klein and Benjamin Triplett in the Department of Aeronautics & Astronautics, and graduate student Patrick Bettale in the Department of Electrical Engineering. The research was supported by grants from the National Science Foundation and the Air Force Office of Scientific Research.

The robots look rather fishlike because they use fins rather than propellers. This makes them potentially more maneuverable and creates lower drag than propeller vessels, and also could be less conspicuous by generating fewer air bubbles. See a video of Robofish and a video of three Robofish swimming together.

But while other research groups have developed fishlike robots, what's novel with this system is that the robotic fish can communicate wirelessly underwater. Again, Morgansen looked to natural systems for inspiration. The engineers worked with collaborator Julia Parrish, an associate professor in the UW's School of Aquatic and Fishery Sciences, to record patterns of fish schools' behavior. 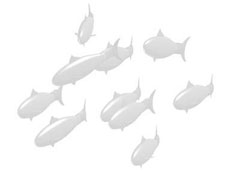 "In schooling and herding animals, you can get much more efficient maneuvers and smoother behaviors than what we can do in engineering right now," Morgansen explained. "The idea of these experiments [with schools of live fish] is to ask, 'How are they doing it?' and see if we can come up with some ideas."

"The fish that have a strong idea tend to dominate over those that don't," Morgansen said. "That has implications for what will happen in a group of vehicles. Can one vehicle make the rest of the group do something just based on its behavior?"

Beyond finding the optimal way to coordinate movement of the robots, the researchers faced major challenges in having robots transmit information through dense water.

"When you're underwater you run into problems with not being able to send a lot of data," Morgansen said. State of the art, she added, is 80 bytes, or about 32 numbers, per second.

The energy required to send the information over long distances is prohibitive because the robots have limited battery power. What's more, signals can become garbled when they reflect off the surface or off of any obstacles.

Messages were sent between the robots using low-frequency sonar pulses, or pressure waves. The new results showed that only about half the information was received successfully, yet because of the way the Robofish were programmed they were still able to accomplish their tasks. Robots that can independently carry out two simple sets of instructions -- swimming in the same direction or swimming in different directions -- will allow more complicated routines.

Now researchers are using the fish's coordination ability to do a task more similar to what they would face in the ocean. The Robofish pack's first assignment, beginning this summer, will be to trail a remote-controlled toy shark.

"In schooling and herding animals, you can get much more efficient maneuvers and smoother behaviors than what we can do in engineering right now."
- Kristi Morgansen