The warp-speed of scientific discovery is also warping traditional disciplinary boundaries. Advancing technology, knowledge and data explosions, and research specialization are driving an ever-greater need to work in interdisciplinary teams to tackle complex scientific and societal problems that transcend all boundaries. More researchers themselves are spanning disciplines and evolving into hybrid engineers and scientists.

We introduce you to four young faculty members working in arenas you might find surprising. All have won prestigious National Science Foundation awards. They are among the new faces of engineering who are exploring beyond boundaries, driving discovery, and reshaping the profession.

Alberto Aliseda
The realms of microbubbles 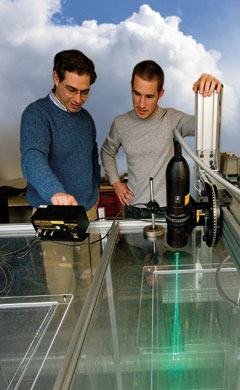 In his native Spain, Alberto Aliseda studied aeronautical engineering, then earned a PhD in fluid mechanics at the University of California San Diego. Aliseda still has his sights set skyward, but at clouds, not airplanes. His other medium of interest is human blood circulation, rather unexpected for an assistant professor of mechanical engineering. Bubbles are the bridge.

Aliseda's doctoral research focused on a fundamental and challenging problem in fluid mechanics, the integration of turbulent flows with droplets.

"When I gave talks at conferences, atmospheric scientists would tell me my work my might help explain how raindrops form in turbulent clouds. Medical specialists would talk about the action of microbubbles in blood. The commonalities are in the physics of fluids," Aliseda said. He decided to delve into cardiovascular circulation during his postdoctoral work, sitting in on relevant medical school classes to learn the language of physicians.

Since joining the ME faculty in 2008 he has collaborated with vascular surgeons and radiologists on research to improve diagnostic tests. Injecting microbubbles in saline solution into the bloodstream improves the contrast between the heart wall and blood during ultrasound tests, but physicians can't control how many microbubbles reach the heart or when they arrive, so tests are a matter of trial and error.

Aliseda's National Science Foundation CAREER award supports five years of basic research on complex interactions involved in the physics of blood flow, the physics of the ultrasound force field, and the dynamics of microbubbles. The ultimate goal is to incorporate the bubbles into "smart" drug delivery systems for targeted drug delivery with fewer systemic side effects.

Aliseda has received NSF and Department of Energy grants to study how micro droplets suspended in clouds coalesce into raindrops. "The growing need to model the weather and track climate change makes predicting cloud cover and rainfall increasingly important," he said. Simulating clouds and turbulent air flow in his lab's small wind tunnel could lead to mathematical models that add to the complex puzzle of weather prediction. In this work he collaborates with faculty in atmospheric sciences, oceanography, and civil engineering. And yes, Aliseda now regards himself as a true hybrid researcher, comfortable working across several distinct disciplines.


Georg Seelig
On the frontiers of synthetic biology 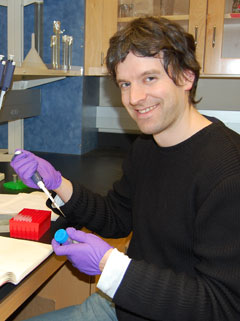 In a laboratory in the Electrical Engineering building, interdisciplinary teams of EE and Computer Science & Engineering faculty and graduate students are working in the new field of synthetic biology. One is assistant professor Georg Seelig, who came to the UW in 2008 with joint appointments in both departments. He also holds an adjunct appointment in Bioengineering.

Seelig trained in physics, not engineering, and it would be hard to find a better example of a "hybrid" researcher who is at home in an environment integrating a half-dozen science and engineering disciplines. He earned his doctorate in theoretical condensed matter physics at the University of Geneva. While a visiting scientist at Bell Labs in New Jersey, he became intrigued with new biological systems and DNA technology and began postdoctoral research in this arena in 2003 at the California Institute of Technology.

"Biology is the new frontier in science," Seelig said. "Biological systems are so complex and there is still so much to learn. On the downside, this also makes it hard to engineer novel molecular systems that can operate in a biological environment."

Seelig describes himself as a molecular programmer. "We use nucleic acids as nanoscale building material for molecular circuitry. We can take advantage of design ideas from computer science and electrical engineering to build new programmable biological circuitry. The goal is to build complex control circuits that can behave similarly to existing biological circuits such as gene regulatory networks," Seelig said.

His team has built nucleic-acid logic circuits that function reliably in an aqueous, cell-free environment. Now the challenge is to create molecules that will detect mRNA and microRNA in a cellular environment and regulate target genes. Ultimately such circuits could lead to "smart" drug delivery systems to treat disease. He recently received a 2010 NSF CAREER Award to further his work to design nucleic acid circuitry.

Seelig also is helping train the next generation of cross-disciplinary engineers and scientists in collaboration with EE professor Eric Klavins, who spearheaded a series of under-graduate courses in synthetic biology that are drawings students from across campus. 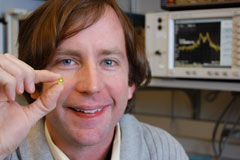 Song sparrows don't immediately flit to mind as a research focus for an engineer, but they have found their way into Brian Otis's portfolio through a cross-campus collaboration with a Department of Psychology research team that studies how young sparrows acquire their song repertoire. This model for the neurobiology of learning has surprising parallels to language learning by humans. The next step is field research to study the social factors among sparrows that may be key to song learning.

Providing the tools is Brian Otis, assistant professor of electrical engineering. He collaborated with Dr. John Burt to design wireless transceiver devices they call Encounternet tags that weigh only a gram and are a hundred times smaller than any similar devices. Tags placed on song sparrows can track social interactions and transmit signals to nearby receivers. The system had a successful field test in February and Otis and team will continue to refine the hardware with National Science Foundation grant funding.

"The song sparrow research is exciting," Otis said, "and I'm even more excited about our next-generation sensor, called the Bumblebee for its yellow platform." This ultra lightweight (0.3 g) low-power sensor with 100,000 transistors in each microcircuit can continuously transmit data over 10 meters for about three days on one 0.17-g battery. With further advances these tags could have applications for monitoring endangered species.

"The Bumblebee can be taped to a person's skin to record extra-cellular neural or muscular signals," Otis said. "Future uses might include health monitoring and a wireless human-computer interface powered by neuromuscular signals."

Otis has been integrating engineering and biological disciplines since he was a UWEE undergraduate. He returned to the UW in 2005 after completing his PhD in EE and computer science at UC Berkeley. Last year he won an NSF CAREER Award to research integrated circuitry for recording signals on the surface of the brain, with potential applications for neuroprosthetics.

"We've had to learn a lot about biology, psychology, and neuroscience," Otis said. "This other expertise sneaks up on you, but we need to stay humble about what we don't know. EE is my first love, and I'm still primarily a circuit designer." 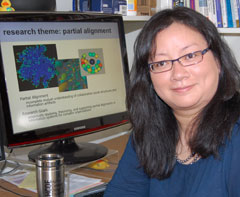 It's unusual for an engineering school to recruit a sociologist to its faculty, but UW Engineering did so in early 2009 when it hired Charlotte Lee as an assistant professor in the Department of Human Centered Design & Engineering. She arrived with a BS (UC–Berkeley) and MS (San Jose State) in sociology and a PhD in information studies from UCLA.

"As a student I was entranced with social science research methods," Lee said, "but all my friends were engineers, and I finally realized that engineering problems fascinated me the most."

She is taking on an important new area of research by studying how engineers and scientists work across disciplinary boundaries on huge, complex problems requiring analysis of large-scale data sets and development of cyber infrastructures. These initiatives are often geographically diverse and reliant on supercomputers.

One driver is the continuous monitoring of environments and systems made possible by inexpensive sensors. The data collected are relevant for many disciplines, but how do scientists collaborate to manage it all and decide what research questions are the most important?

"Science is changing so rapidly. The Internet has transformed the way we work, but it's only the beginning. Cloud computing and e-science are the future," Lee said. "It's a new world and everyone is struggling to surf the technology wave. I'll look at where this new world is headed with a goal to help improve information systems that support innovation. Also fascinating is how researchers working across disciplines develop hybrid identities."

A 2010 National Science Foundation CAREER Award enables her to dive into these questions during a five-year study to begin this fall.