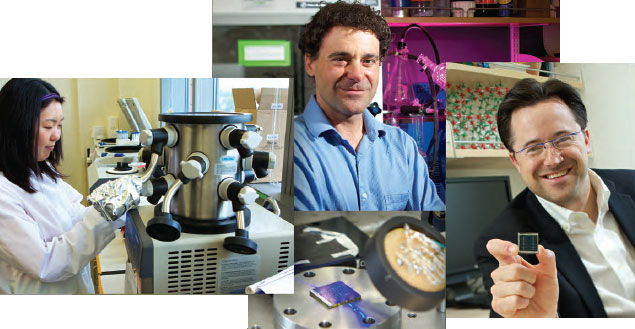 Could the University of Washington be at the center of the next digital revolution? College of Engineering Dean Matt O’Donnell thinks so, a conviction that’s behind the recent launch of the university’s Molecular Engineering and Sciences (MolES) Institute, one of the first such programs in the country.

Molecular engineering is such a new field that each of its practitioners defines it in a slightly different way. But what they all have in common is an emphasis on designing new molecules to do useful things, and building materials from the molecule up.

In the coming years, manufacturing at the molecular scale “will affect increasingly large sectors of the economy,” O’Donnell predicts.

But this isn’t just about commerce. The rise of molecular engineering also represents an intellectual revolution, a new way of thinking about the physical world in the same way that the digital revolution transformed our thinking about information.

“Our challenge is, how can we get drugs into the place that our body wants to protect most?”

Pun is working with talented chemists to combine fluorescent molecules with other molecules that specifically recognize cancerous or precancerous cells.

And, just like the digital revolution, molecular engineering could profoundly transform and improve our everyday lives.

“We have a grand challenge model at the MolES Institute that envisions teams of top faculty working together on solutions to major societal challenges,” says institute director Patrick Stayton. Specifically, researchers will be pursuing new ways to diagnose disease earlier and treat it more precisely, and develop inexpensive and practical methods to harness clean sources of energy.

Why focus on these two areas, “biotech” and “cleantech” in MolES Institute shorthand? Simple: “The people,” says O’Donnell.

That is, the UW already had faculty members contributing important discoveries on these topics. But, says Stayton, “We felt these efforts were scattered.” Bringing researchers together to work across disciplines could multiply their efforts—and their achievements.

But the challenges will be grand indeed. “The easy problems have been sorted out by now,” says professor of chemical engineering Hugh Hillhouse. “These things take big efforts, they take collaboration,” Hillhouse adds, and he knows firsthand—his work is aimed at developing cheap, efficient solar cells, a problem that has flummoxed researchers for over half a century.

Currently, the usual approach to manufacturing solar cells involves growing giant crystals of silicon or other materials, a manufacturing process fraught with expense and technical difficulty. Instead, Hillhouse hopes to write a new solar story in ink—literally. 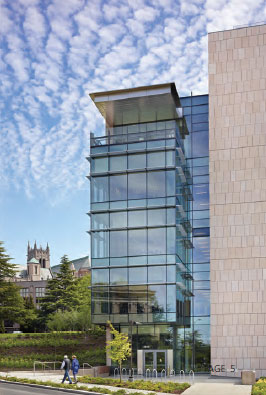 The ink is a black solution composed of nanocrystals made from copper, tin, zinc, and sulfur. These abundant, readily available elements could someday support manufacturing at a large scale. And that manufacturing process would be considerably simpler than the current one.

Of course, it’s not quite that simple. “We’ve made ink-based solar cells that are 12 percent efficient,” Hillhouse says—that is, they convert 12 percent of the sun’s energy that hits them directly into electricity. That’s not good enough. The average silicon solar panel is about 15 percent efficient, and getting better all the time.

So Hillhouse’s next step, in collaboration with the other solar-energy researchers who inhabit the first floor of the MolES building, will be to improve the efficiency of those solar cells bit by bit, testing out tens of thousands of new molecular combinations using high-throughput techniques.

“If we get to 20%,” he predicts, “they will be everywhere.” That’s far from certain. But it’s just possible enough to keep Hillhouse going.

Research on the biotech side of MolES is equally audacious. Bioengineering professor Suzie Pun gives one example: “Our challenge is, how can we get drugs into the place that our body wants to protect most?” she says.

But Pun and her collaborators aim to change that by building molecular vehicles to help transport drugs across the blood-brain barrier. They’re taking clues from pathogens like polio and tetanus that affect the central nervous system, and engineering molecular systems that can mimic the way those pathogens get inside.

Pun and others are applying a similar approach to a dizzying array of biomedical problems. Another project in Pun’s lab aims to identify cancer earlier than is currently possible—much earlier.

A cell in the process of turning cancerous “starts to make molecular changes very early on, but it still looks like a normal cell to the eye,” Pun explains. The changes are too small to see with current imaging methods like ultrasound and CT scan.

So to make these changes visible, Pun is working with talented chemists to combine fluorescent molecules with other molecules that specifically recognize cancerous or precancerous cells. “We’re trying to find markers, and light them up,” she says. Next, Pun’s group will collaborate with UW professor of gastroenterology Joo Ha Hwang to test their approach using human tissue samples.

Watch The Rise of Molecular Engineering on UWTV (channel 27). In this half-hour documentary you'll meet the scientists, explore the building and delve deeper into this emerging field.

Attend the Engineering Lecture Series and go in-depth on the potential energy and health applications of molecular engineering and science.

Read From the Ground Up, the story of the Molecular Engineering & Sciences Building.

But the MolES Institute is more than just research. It will also offer graduate-level education programs, including a track program for students in related disciplines and, perhaps, a dedicated PhD program that could begin as early as Fall Quarter 2013.

In many interdisciplinary courses, “The first problem students have is just to talk to each other,” observes René Overney, professor of chemical engineering and director of education for the MolES Institute. That’s because underlying scientific concepts and, especially, vocabulary differ so much across various fields.

As a result, it’s not enough to just bring people from different disciplines together. Instead, MolES will train students in a way that helps them understand across disciplines so that they can better work together.

“They cannot be experts in everything, that’s not the point,” says Overney, who draws on his success as director of the interdisciplinary Nanoscience and Molecular Engineering program for undergraduates. But a chemist working on molecular synthesis should have a sense of what a molecular modeler does, and vice versa. Core MolES courses will be designed to create these foundations of common knowledge.

To O’Donnell, the MolES Institute’s educational impact—formal program participation as well as students working in associated researchers’ labs—will be a key measure of its overall success. “I want to see huge student involvement,” he says.