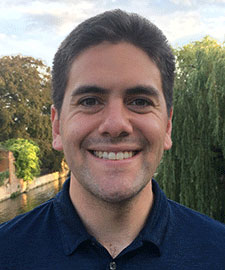 Lucas Meza joins ME from the University of Cambridge where he was a research associate studying the micromechanical behavior of 3-D woven fiber composites. Previously, he was at the California Institute of Technology, where he worked on ultralight, hierarchical metamaterials composed of nanoscale ceramics that attained high strength and had the capacity recover after significant compression.

At the UW, he plans to investigate the connection between small-scale material phenomena and large-scale mechanical properties in natural and engineered materials with the specific goal of using nanoscale architecture as a design tool to create new materials with novel mechanical properties. His work has been featured on the covers of Proceedings of the National Academy of Science and Nature Materials, and he was given the Robert W. Cahn Paper of the Year Award in 2014 by the Journal of Materials Science.