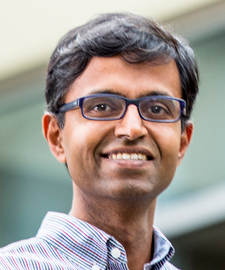 Sidd’s pioneering research in robotic manipulation is focused on enabling robots to safely and gracefully perform complex tasks in dynamic environments, with and around people. He seeks to understand and formalize the “how” and the “why” of human interactions to build mathematical models of physical behavior, and then uses those models to transfer behavior from human to robot, and from robot to robot. Sidd built HERB, the one-of-a-kind Home Exploring Robot Butler, to serve as a testbed for new algorithms, software and other technologies that will help robots to engage in robust interactions and collaborations with their human counterparts.

Over the course of his career, Sidd has made a number of fundamental contributions to the field of robotics, including advances in motion planning, state estimation, information gathering, and shared autonomy. As a senior research scientist at Intel Labs Pittsburgh, he initiated and led the company’s research efforts in robotics from 2006 to 2011.