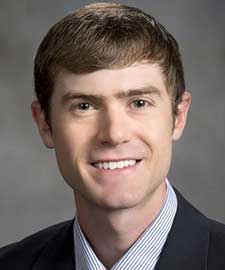 Brett Maurer joins the department in January 2017 from Virginia Tech, where he completed his Ph.D. Brett’s research focuses on geotechnical earthquake engineering, with the goal of reducing the impacts of earthquakes on civil infrastructure, human life and the environment. To achieve this, he researches the occurrence, consequence and mitigation of soil liquefaction, which causes soil to behave like a liquid during earthquakes. Brett is currently developing frameworks to improve the resiliency of infrastructure in future earthquakes. He is also performing forensic analyses of liquefaction induced by past earthquakes, to better inform earthquake preparation in areas of the United States where information about historic earthquakes is lacking.

Brett is the recipient of numerous awards, most recently the 2016 Norman Medal from the American Society of Civil Engineers. For two consecutive years, in 2014 and 2015, he won the Best Graduate Student Presentation from the Seismological Society of America Eastern Section.