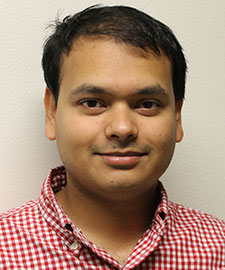 Arka Majumdar joins Electrical Engineering from Stanford University, where he received his PhD and was recently a postdoctoral fellow in physics.

His research interests include devices in nanophotonics, nanometallics and quantum optoelectronics, as well as the fundamentals and applications of photonics in information processing. He studies nano-scale light-matter interaction in two extreme optical power levels: at the low photon level with quantum optical effects, as well as high photon numbers which are capable of generating light at new frequencies.

Arka has published more than 30 scientific papers in distinguished journals and cited more than 300 times. He received the Gold Medal from the President of India in 2007 and the Texas Instruments Fellowship at Stanford from 2007-2010.