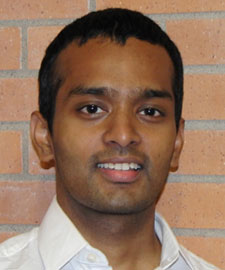 Shyamnath Gollakota joins Computer Science & Engineering from the Massachusetts Institute of Technology where he recently completed his Ph.D.

His research goal is to design and build new protocols and systems that improve the performance and security of wireless networks. His interdisciplinary approach to system design combines network protocols with physical layer signal transmissions to improve performance. He developed a system that protects medical implants from attacks that could change or spy on a patient’s treatment plan.