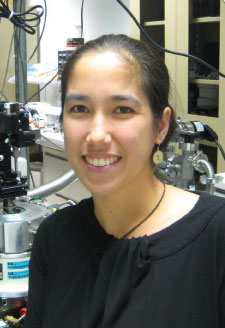 Kai-Mei Fu joins the Physics and Electrical Engineering departments in the fall of 2011 from HP Labs in Palo Alto where she has been a researcher since 2007. Her current research interests include the optical control and characterization of spins in the solid state, such as semiconductor electrons/holes and diamond nitrogen-vacancy centers, with applications in quantum information processing, spintronics, and magnetic sensing/imaging for biological systems.

Her awards include the Achievement Reward for College Students Fellowship, a National Science Foundation Graduate Fellowship, and the Princeton Shenstone Prize for Outstanding Work in Experimental Physics.