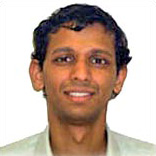 M.P. Anantram (Anant) joined the EE department in winter 2009, arriving from the University of Waterloo, where he was a professor in nanotechnology engineering. Earlier in his career worked at the Center for Nanotechnology, NASA Ames Research Center in California.

Anantram’s research addresses theory, algorithms, and computational models to study molecular, semiconductor, and bionano structures. The goal is to build design tools sophisticated enough to understand the device physics and then perform extensive design-analysis before expensive fabrication. He is studying the electrical, optoelectronic, and electromechanical properties of nanodevices such as nanotransistors, interconnects, electromechanical switches, solar cells, and LEDs. Some of the nanomaterials considered are semiconducting silicon and germanium nanowires, various carbon-based nanostructures, carbon nanotube fibers/composites, and organic molecules, and also charge transport in biomolecules such as DNA in various environments.

Among his honors are two best paper awards and a technical achievement award from the Computer Science Corporation.